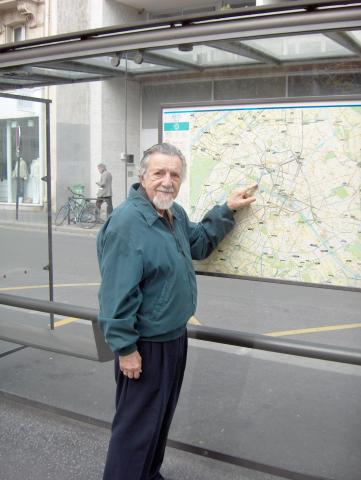 1 and 2. We asked Bill two questions:”Tell us a little bit about your most recent Untour.” and “What is your favorite Untours memory?” and here’s his answer:

Late in October 2009, we took an Air France flight out of Dulles to Paris.  My wife needs assistance in walking, so we were placed on the aircraft very gently and an attendant struck up a conversation in French with my wife. This was the beginning of another memorable trip to the City of Lights. Reaching altitude, an attendant brought us each a paper cup of champagne stating,  “This is from the first class section and we didn’t want the other passengers to see it”.  When they heard that we were going to celebrate my 90th birthday in Paris, more champagne flowed before dinner — after dinner and into the night. Upon landing in Paris, we had to wait until the passengers had left the plane and we were escorted out and the Captain shook our hand and wished us a good vacation

Smiling Jean (from Untours)  met us at the Paris Airport and said that Eddy would drive us to our apartment (Rue Gracieuse) in the Latin Quarter. 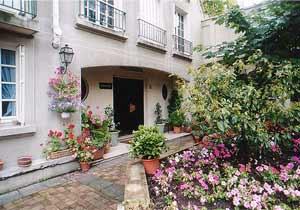 It was like coming home.  Patrick, the concierge, met us with open arms. (This was our third year to this apartment). The maid cleaning the apartment had not left and welcomed us ‘home’.  We unpacked a few things and I went to the bakery for croissants. The fridge was properly supplied and, of course, a nice bottle of wine was on the table.  Our first night back we decided “Frog Legs” would be fine. So off to a restaurant on Rue Mouffetard we went and when we entered the restaurant, the owner came running to us and said “I haven’t seen you in a long time!”  We explained that we were in the States and had just returned.  She said, “The Madame drinks champagne and you, Monsieur, drink a Kir, is that correct?”  It was placed on the table we had in prior years. The Chef came out and said hello, and his comment was “You like plenty of garlic, no?”  There were three other restaurants that gave us the same treatment.

I could go on and on how the merchants and all the people we met treated us, but I’ll stop here. Here in the States I lecture a a senior center about travel. I tell them that a smile, good manners and not over tipping is the secret to have fun anyplace in the world.

3. “How is taking an Untour different from other ways of travelling?”

In getting on in age, it is nice to have a travel agency that plans and take cares of the details for you. We like to be with the locals so we can learn their way of life.

4. “If you could describe an Untour in just three words, what would they be?”

Three words to describe  an Untour are “WOW!!! Unbelievable!!! Unforgettable!!!”