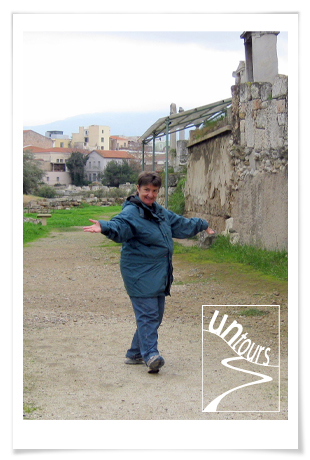 About the picture, Pam says: ” The picture is taken on The Sacred Way in Athens.  I was pretty thrilled to be on the Sacred Way having read about Greece for years, so I was doing a little “Sacred Way” dance and my husband got hold of the camera…”

1.    Tell us a little bit about your most recent Untour.

I studied in Spain when I was in college in the sixties and I had not been back since the seventies.  I wanted to show Spain to my husband and see the changes that had taken place since then.  We flew into Madrid and spent five days there visiting museums, strolling in the Retiro and revisiting places I had been.  We stayed at the Suite Prado – a very comfortable, well-situated hotel.

We took the train to Cordoba, picked up our car and drove to Priego de Cordoba where we stayed for two weeks on our Spain Untour.  Our apartment in La Posada Real was very comfortable and Juan was always on hand to help.  Cordoba and Granada were an hour away on the excellent road system, so we visited there more than once.  But mostly we hung around Priego, which is a beautiful little town.  We went for walks on the Green Way and wandered around the little villages of the Subbetica.  On our first weekend in Priego there was a Medieval Market.  Little shops were set up around the square selling fresh local cheese, bread and crafts of all kinds.   There was even a falconer!

We were there during May, which is the month in which the Virgin Mary is honored.  On our second Sunday, the huge statue of Our Lady of Charity was paraded through the town to the cheers of the local people.  It was lit with candles and carried by about thirty young men and followed by a small marching band.  The only disappointment was that it rained a great deal during our visit, so we did not go to Sevilla as we had planned.

2.    What is your favorite Untours memory?

The second time we visited Granada we wandered around the Albaicin.  As we came up to the Plaza St. Nicolas there was a group of men standing by the cross and singing “cante jondo”.[Editor’s note: Cante jondo is a vocal style in flamenco and an unspoiled form of Andalusian folk music.  The name means deep song.}  A woman from the audience started dancing and others joined in.  All this as we looked over one of the most spectacular vistas in the world.

3.    How is taking an Untour different from other ways of traveling?

Untours are flexible.  If you want help, there is someone there to provide it.  If you want to do your own thing, that’s fine too.  Having an apartment means that you don’t have to go to a restaurant for every meal, which gets old very fast.  It also requires you to shop – to find where the best local food is and to learn how to cook it.  It connects you to the life of the community.  Regular tours feel like traveling in a bubble in which you only interact with the other people on the tour.  An Untour provides the support you need to actually live in a new place for a while.

4.    If you could describe an Untour in just 3 words, what would they be?