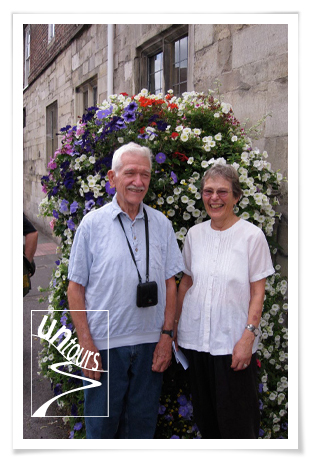 Tell us a little bit about your most recent Untour and why you chose that particular destination?

We enjoyed two Untours in Spain in 2008.  First, we spent two weeks in Fuente Tojar (near Priego de Cordoba), enjoying auto trips to Granada, Cordoba, Sevilla.  Then to Malaga, where we turned in the car, and flew to Barcelona for another two weeks.  This time, without a car, and with our two teenaged grandchildren!

Why did you choose to go there?

We only knew Spain through studying Spanish, and through literature – and because our granddaughter had been studying Spanish in high school.  And of course we live in Los Angeles, which like the rest of the Southwest has some Spanish history of its own!

There are so many – perhaps the scenes of Olympia, of ancient Greece, within a day or two of driving on the magnificent new bridge across the strait at the Gulf of Corinth.

Taking an Untour enables one to live as much as possible like a resident of the country.