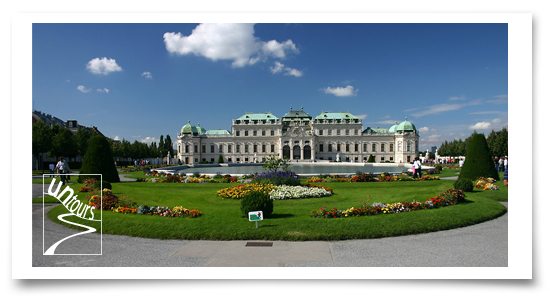 Here’s why there’s no picture of Bob & Diane in Vienna: “…none of our travel photos include the two of us.  We are more interested in a uncluttered photo of the object of interest, I guess.  Can you run a stock photo of one of our favorite sites in Vienna such as a beautiful park, the Belvedere, opera house or Musikverein?”  So instead we offer this beautiful picture of the Belvedere by Ivo Jansch

Tell us about your most recent Untour?

We visited Vienna with Untours in 2006 and made the recommended rounds for a week.  It was apparent that we barely scratched the surface, so we scheduled a return visit for two weeks in October 2011.  Our comfortable Untours apartment was perfectly situated.  We attended three superb classical music concerts at the Musikverein.  Our host, Claudia Prieler, alerted us to music in the churches and met us on the first Sunday for a Mozart mass at St. Augustine.  The following Sunday, we heard a Schubert mass at the Jesuit church.  Claudia also arranged for a day trip to the lovely countryside near Linz where Anton Bruckner, the composer, was born, worked and is buried.  On an Indian summer day, we took a walking tour of Grinzing and visited Gustav Mahler’s grave site.  Back stage tours of the Vienna State Opera and the Musikverein were  interesting.  We have a special interest is the work of Jugenstil (Art Nouveau) artists, so we spent many hours viewing the works of Otto Wagner, Josef Hoffman, Koloman Moser and others.  This included several long architectural walks.  Since the 150th anniversary of Gustav Klimts’ birth was approaching, much of his art was on display in museums in the city and we viewed it all.  Thanks to a sympathetic museum staff member, we were allowed to attend a Klimt-Hoffman art show at the Lower Belvedere.  The show was opening on our day of departure and we would have missed it had not the staff allowed us to join a press preview.  We discovered many wonderful shops, restaurants, wines, pastries and bakeries.  Vienna speaks to us and we plan to return in two years.

In Vienna, Claudia Prieler invited us to attend an evening benefit concert to raise funds for the relief of Japanese tsunami victims.  The concert was held at a Japanese restaurant and presented by members of the Japanese classical music community in Vienna.  Following a successful concert, many of us stayed to enjoy an extended meal where we dined and chatted with the performers and Claudia’s musical friends.  The pleasant evening ended late and we arrived back at our apartment just before midnight.

Untours provides a safety net for the independent traveler.  It is comforting to know that Untours staff is there if needed.  After a long, tiring flight, we appreciate being met at the airport on arrival.  The orientation meetings are always interesting and informative.   The efficient office staff in Media, PA, and the capable local Untours hosts truly make a difference.

If you could describe Untours in just three words, what would they be?