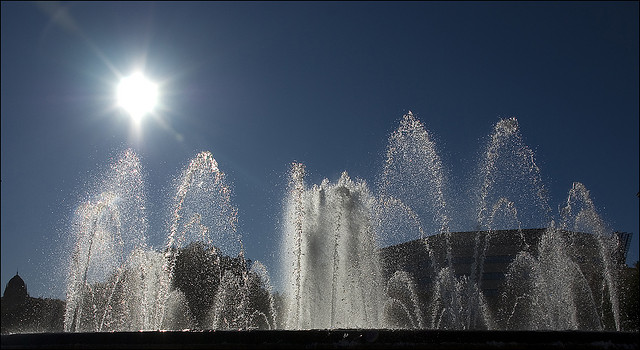 We don’t have a picture of our Untourists of the Week this week,  but we do have a shot of their favorite memory, the ‘dancing waters’ at the National Art Museum in Barcelona.  Jackie travelled with her sister Lillys on our Spanish Untours, Barcelona and Andalusia, and recently, when they were together on a family reunion, they composed this  for us.
.

Tell us a  little bit about your most recent Untour.

Spain was our most recent Untour, in October of 2011. We spent a week in Andalusia and a second week in Barcelona. The contrast between the two experiences was intriguing to us. Our lovely apartment in Andalusia was in the midst of an olive grove, attached to our host’s farmhouse. We would drive every day to a destination – Seville, Granada, Córdoba, the “whitewashed towns” in the hills around us – returning at night to the quiet of the countryside. Our Barcelona apartment was in the city’s center, and we could walk everywhere, occasionally hopping a very convenient bus.

Perhaps our favorite memory was spending an evening at the “dancing waters” weekly lighted display at the large fountain in front of the national art museum. It was a popular community event, so many families were there, taking pictures in front of the color-lit fountain, delighting their toddlers and young children with the spectacle, and oohing and aahing together. People chatted with us in a friendly way that made us feel like community members rather than tourists.

Because of the help Untours gives in finding lodging and orienting a traveler, it seems to us like we have all the advantages of a tour and the independence of traveling alone. Each of the orientations was a delightful adventure: in Andalusia we visited a local Roman ruin with a very knowledgeable guide and in Barcelona we spent an evening in the city market and did an olive oil tasting. Both included a wonderful local meal. Otherwise we found our way to the destinations that appealed to us and saw everything at our own pace. This allowed us the joys of serendipitous discoveries, like the guitar concert in the art nouveau concert hall in Barcelona and the delightful gift shop near the statue of Maimonides in a little courtyard of Seville. It meant we could break up our tour of the Alhambra with a walk into town for a pleasant meal,  or take the time to climb a famous bell tower, or tour a bat cave with a group of locals rather than a bus-load of foreigners like ourselves.