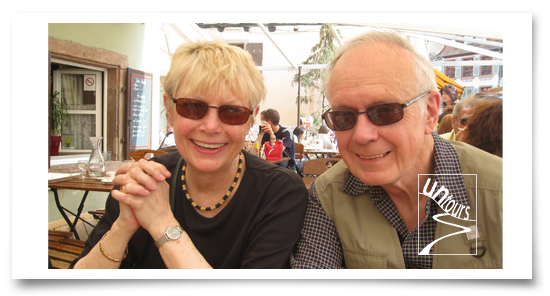 Tell us a little bit about your most recent Untour?

When Marilee asked me some questions about our experiences with Untours, the review of memories turned out to be fun for the most part, funny in some aspects, and always enlightening.  A bit of background:  we have completed 19 Untours, with the 20th to be in Paris next September.  And, although it was never intended to be this way, all of them since June 2004.  Before Untours, I had been to Europe (mostly) and Asia ( 5 or 6 trips) about 70 times with a two-year stay in the UK. Many years earlier, I had read a small article in the New York Times Sunday travel section about Idyll/Untours.  The article itself was one column wide and about 3-4 inches long. But I saved it, meaning to try out Untours when I retired.  Later, much later, at a dinner at Le Navigateur in Paris, I told Brian about it—and he still had the original article.

The obvious pleasure in the Untours approach for us is that we can, and do, travel now when we want to rather than have to go during the summers when the pleasure diminishes in proportion to the number of tourists (like us) who are wherever you are at the moment. Thus, we found ourselves in Leiden this April, an Untour we signed up for because we had not been there together, although we had spent about 3 weeks in Amsterdam together and separately earlier in our lives.  So, although we didn’t not want to go to Leiden, it had never been at the top of our travel-to-take list.  But, as you have probably experienced yourselves, the biggest travel surprises are unplanned by definition, but frequently delightful in execution.  We plan to return in 2014.  Buenos Aires also was not on our Top 10 list, yet we had a terrific time and plan to return there, too.  Thus, in retrospect,  I would have to say that the best Untour for us is always the last one we took—wherever it was.

Basically the Untours style of traveling is a process of transferring your home lifestyle to another place for a period of one, two, three weeks or so.  You can control what you eat, where you eat, when you eat, what you see, what you don’t see, when you sleep, all with an educational twist in surroundings as inviting as you want them to be. It’s as close as most of us will get to living abroad, all the while knowing intrinsically how very American in values we are.

And, this, I think, makes Untourists special; we get the chance to be us and not-us at the same time.

Maybe our favorite memory, certainly at the top of the very special list, was a wine dinner we had while on the Rhine Untour in 2005.  We were hosted by Germany’s first woman kellermeister (kellermeisterin), a woman who had withstood the taunts and jeers of her country’s male wine “experts” who publicly and privately, on radio and on television had ridiculed her at the time of her inclusion into the group.  That particular night, she invited us into her home, cooked dinner for us, gave us a tour of her private wine collection, and told us her story. That magical night everything clicked.  We all talked,  she talked.  She shared wonderful bottles of her private stock.  None of us wanted to break the spell—and it still isn’t broken today.

Practically speaking, taking an Untour means no group travel warnings like “Have your bags in the hall by 0530,” “Breakfast is served from 0630 to 0815,” “Be on the bus by 0745,” and it means no searching for an apartment on line, no harried transport from the airport or train station, and no nervousness from being in a foreign country with or without the language.  And it means knowing that should the need arise, the local Untours representative is at hand for any emergency: health problems, accident, locked doors, or stolen passport—only one of which afflicted us, but which we saw involve other Untourists.

An Untour means being free to have late coffee, to stay in comfortable surroundings if the weather is nasty, to shop in markets as the locals do for food without bar codes and, more importantly, to immerse oneself in the local culture as much as any foreigner can. Untourists’ local encounters are not limited to tour guides or tourist hustlers, but provide the chance to meet local residents in their everyday surroundings–in their bistros, museums, galleries, or concerts.

Especially for a first-time overseas traveler, Untours offers significant reassurance–both from the knowledgeable and friendly staff and from the local representative–that details are carefully arranged, accommodations are as promised, and information is reliable.

If you could describe an Untour in just three words, what would they be?

Pat and Jack have stayed with us in the following places…..(can you guess which one they like best?)

We would just like to say…Pat and Jack are extraordinary, in their taste and choice of apartments and their loyalty to Untours. If you’re thinking of going to any of these Untours, checking out their choices of apartments might be your first best step.