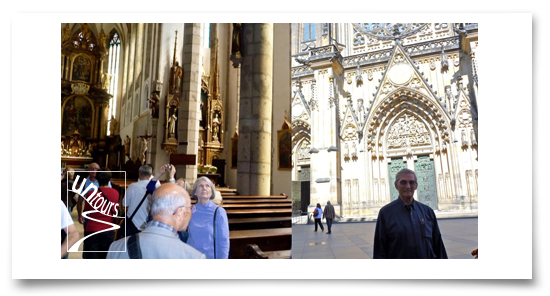 Pat and Roger apologise that the pictures don’t really show them (that’s Pat on the right and Roger on the left.) They say that when they travel, they’re so interested in what they are seeing, they rarely take pictures of one another.  Also, Roger says, that as an architect, he takes way too many pictures of buildings.

Tell us a little bit about your most recent Untour.

We went to Prague and Budapest in May of 2011. We’re from Wisconsin and one thing we were not used to  (but we sure did get to like it fast) was the excellent public transportation in both of these cities.  The trams and the subways were amazing!  We got so we felt like we could go anywhere in both of these cities.  And we kept finding great places to eat, because we felt confident to go on the public transport.  That got us off the beaten path and into the neighborhoods. The fact that Untours covers the basics of how to work the public transportation in Orientation right at the beginning really set us free to do our own thing.

We are big walkers as well…and so between feeling free to use the public transport, and the onsite guides that Untours provided, we roaming all over both cities and felt really well-equipped and independent doing so. 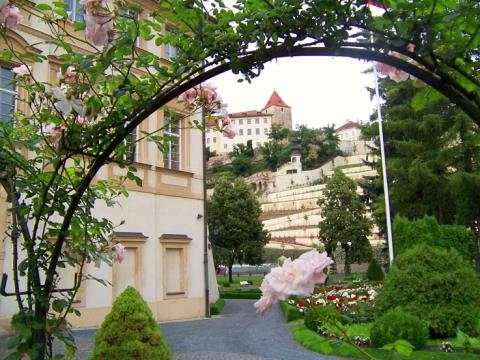 There were a lot of good things, but one that stands out in my memory was our visit to the Castle in Prague.  If you know Prague, you know that the Castle is way up on a hill.  We took the tram up to the Castle, saving ourselves the hard part, but coming down, we’d heard that there were a series of staircases down. Some parts of the climb down were terrassed and eacy, some were steep.  Threading our way through this series of staircases was a little like an adventure in a labyrinth.  We  got to see amazing views of the city, and wonderful gardens.  Prague might just be the most delightful city we’ve ever visited.

In Budapest, we thoroughly enjoyed the big park, I think it’s called the Margaret Island; it’s  an island to itself in the river  –really peaceful, right in the middle of the city.  Also we took an evening river cruise in Budapest (that’s a must) that we enjoyed.  Both our visits to the Central Synagogue (second largest in the world, with fascinating history and architecture)  and the Opera House in Budapest (you don’t have to be an opera buff to like it)  were well worth it.

We were also pleasantly surprised that we enjoyed the train ride between Prague and Budapest as much as we did.  We expected that to be just the necessary transport from one spot to the other, (and 7 hours long!) but we really enjoyed it…next time, we’ll try and arrange to get off in Bratislava, one of the stops.

You get help as you need it and that gives you more personal freedom.  That’s important to us.