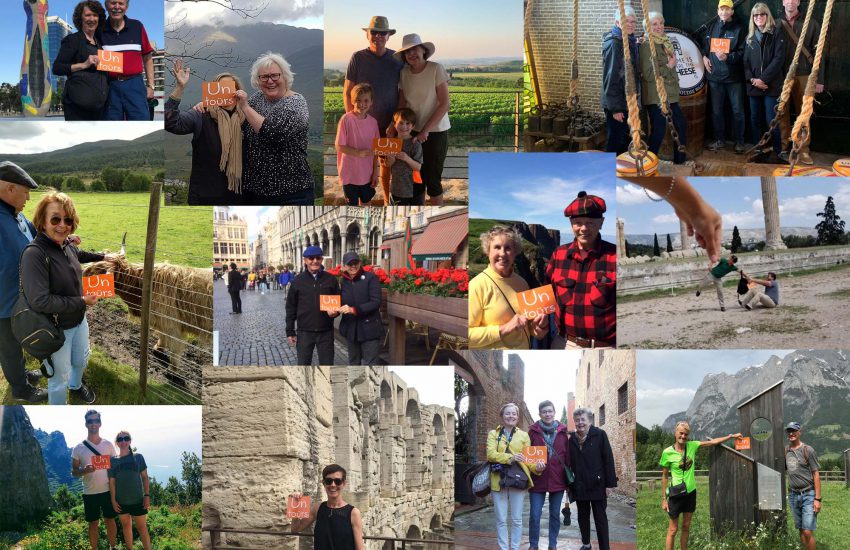 Our Untours Photo Contest was such a success last year, we have decided to keep it going. Please help us choose a winner for 2019! We’ve narrowed it down to the 12 finalists you see here. The winner will receive a free iPad.

Take a look at the competition and vote for your favorite on the form below. We will close voting on December 2, 2019. 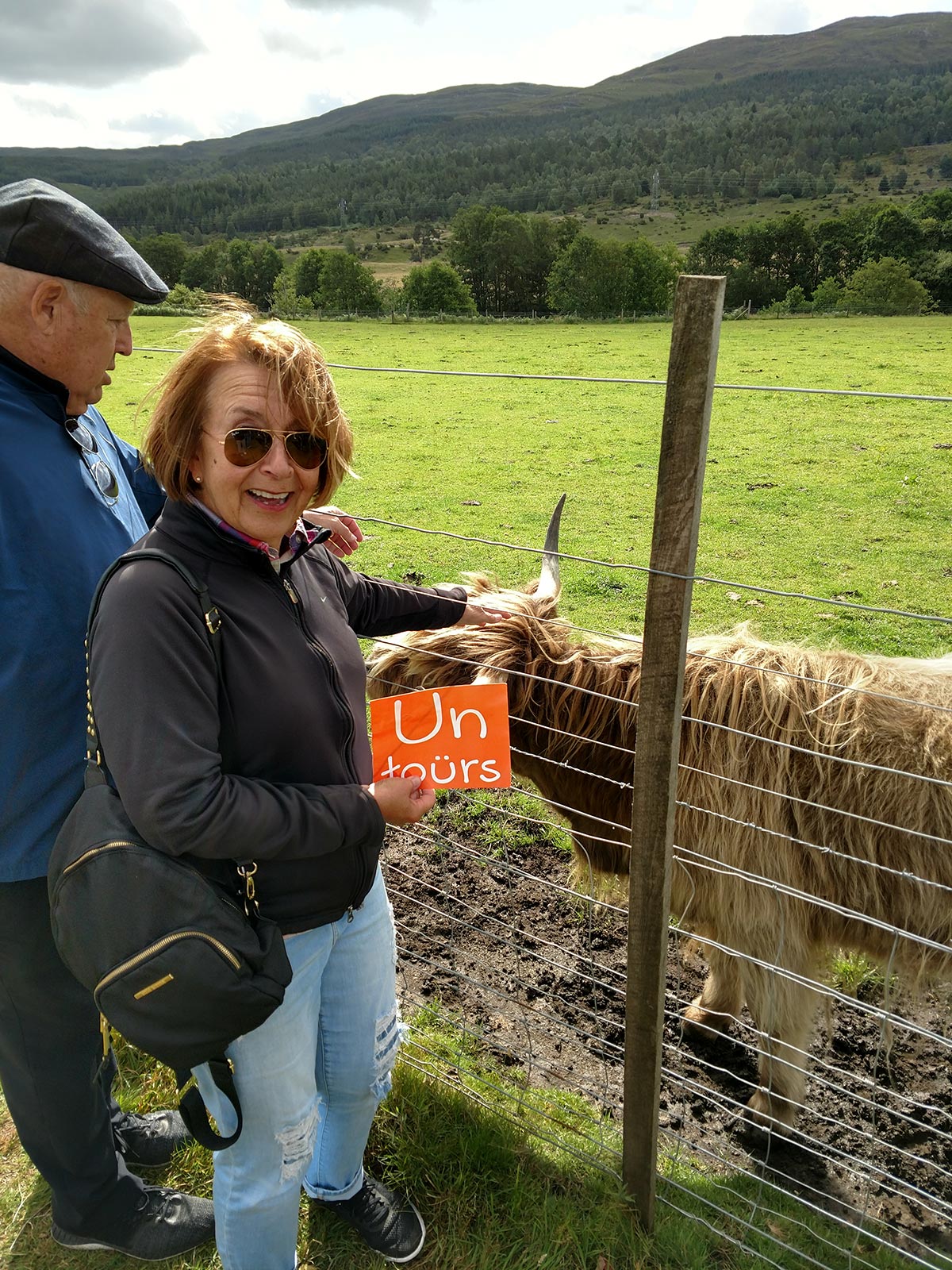 1 Highland Cows
Scottish Highlands Untour
Karen Munoz traveled with her husband and sister-in-law in the Scottish Highlands in the late summer of last year. They enjoyed road trips through the scenic countryside. They spend time in Central Scotland as well, enjoying cities and country. One of Karen’s favorite memories? “I got to pet Highland cows!” 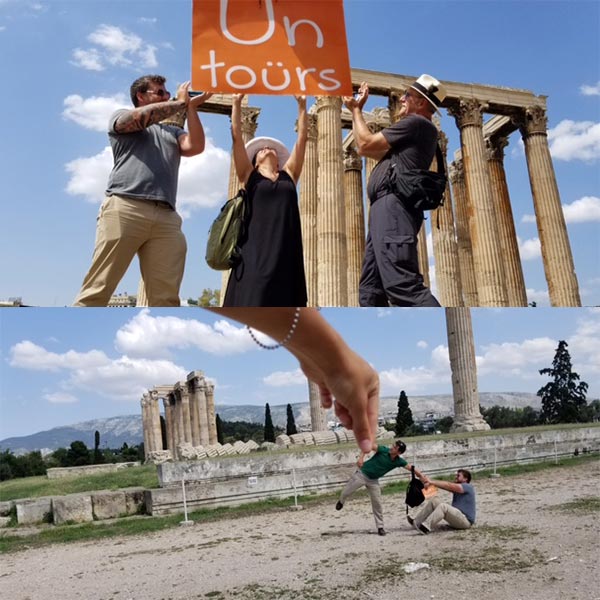 2 Epic Greece
Nafplio, Greece Untour
The Millsaps staged these wonderful photos while touring the archaeological sites on the Peloponnese. Important sites like Corinth, Mycenae, and Epidaurus are easy day trips from the Greece Untour home base of Nafplio. Nafplio’s old town has its own charms as well and is a favorite for Untours year round, including at Christmas. 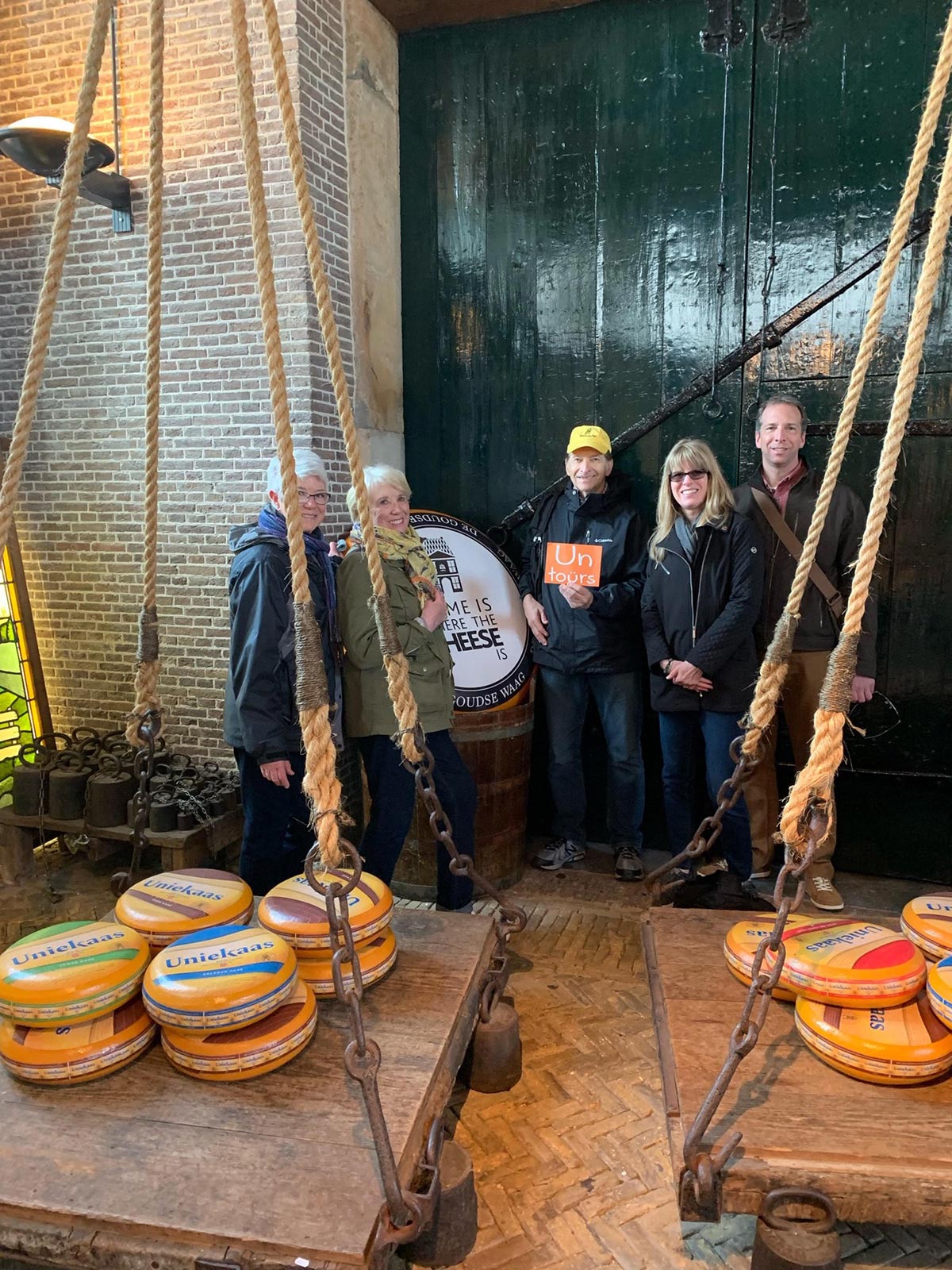 3 Dutch Cheese
Leiden, Holland Untour
Here Holland Untourists Dick, Karen, and Mike Blahnik along with Tricia Castelic and Cassandra Fischer discover the wonderful world of Dutch cheese. Leiden, the homebase of our Holland Untour, has its own traditional cheese to sample. 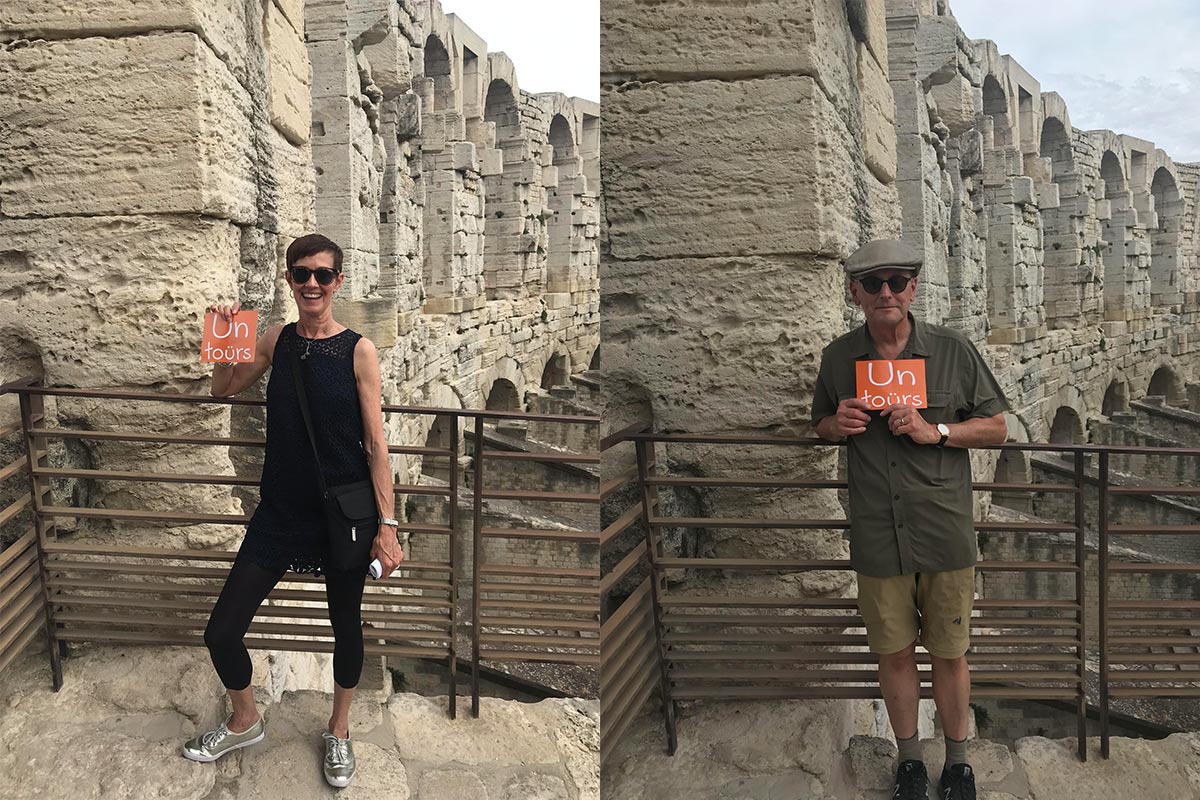 4 Ancient Provence
Arles, Provence Untour
Julie Putman and Michael Yonkers enjoyed their Untour in France, including a visit to the ancient Roman arena in Arles, a day trip from the Provence Untour. They combined Provence with a week in Paris, for a town and country experience of France. That Untours sampler is a popular one! 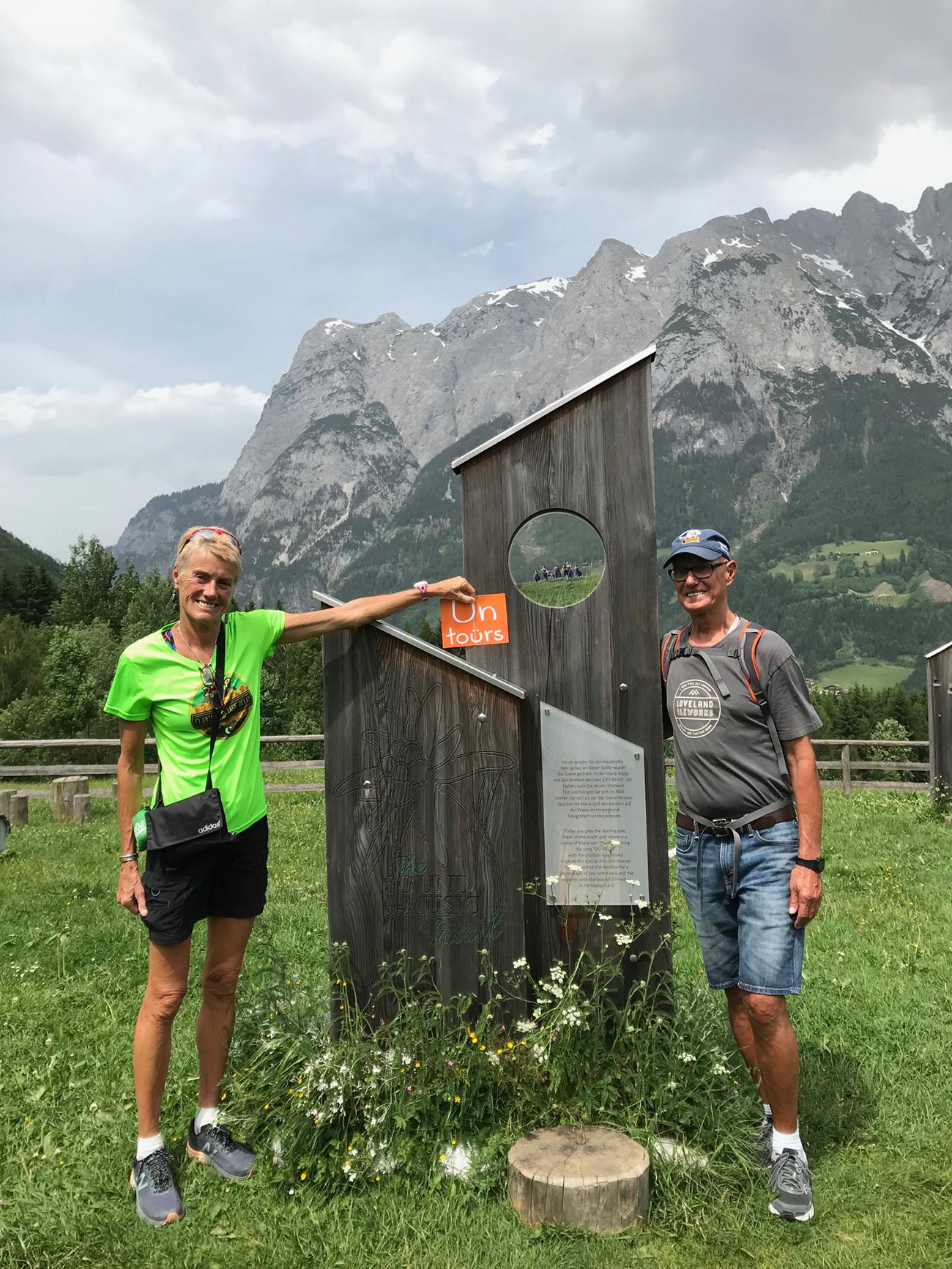 5 Sound of Music Trail
The Alps, Austrian Untour
Sound of Music fans know well that the film was shot in Salzburg and its surrounding mountains. On the outskirts of Salzburg, 5-time Untourists Jane Thompson and David Belenski discovered the Sound of Music Trail, winding through the scenery immortalized in the classic film. Jane and David also spent time in Budapest on their Untour, where they sampled local wine. Jane has been sending us photos of their Untours adventures for years, so I am excited to include her in the contest this year. 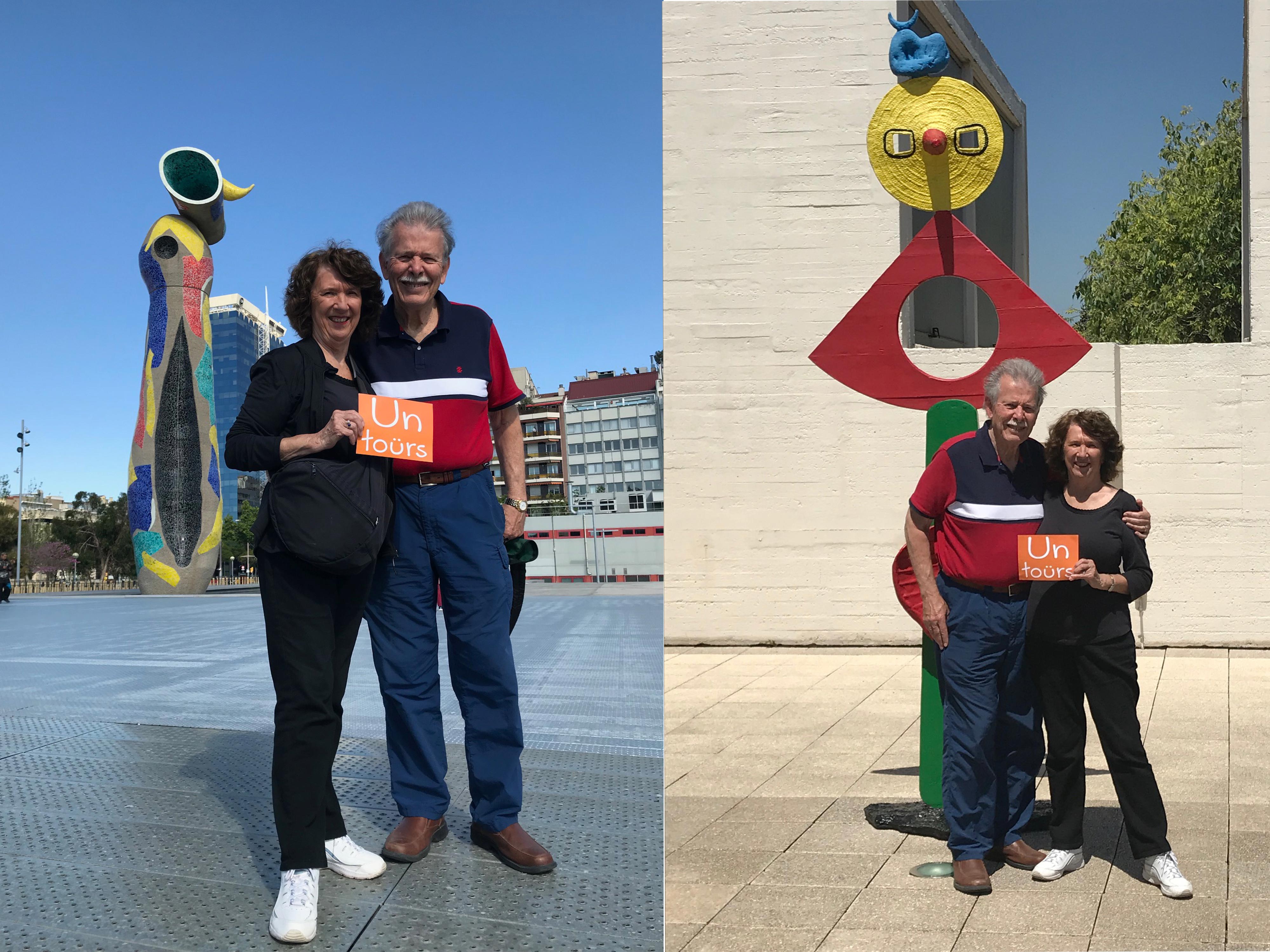 6 Barcelona Art Tour
Barcelona Untour, Spain
The Rickeys enjoyed discovering the modern art, food, modernist architecture, and Catalan culture of this popular city. Spain is the birthplace of Joan Miro and Pablo Picasso, and exploring the Foundacion Miro and the Picasso Museum are an essential part of any visit to Barcelona. Gail and Wynn stayed in the Bruc Balcon apartment in Eixample, a central and very desirable neighborhood filled with modernist architecture. 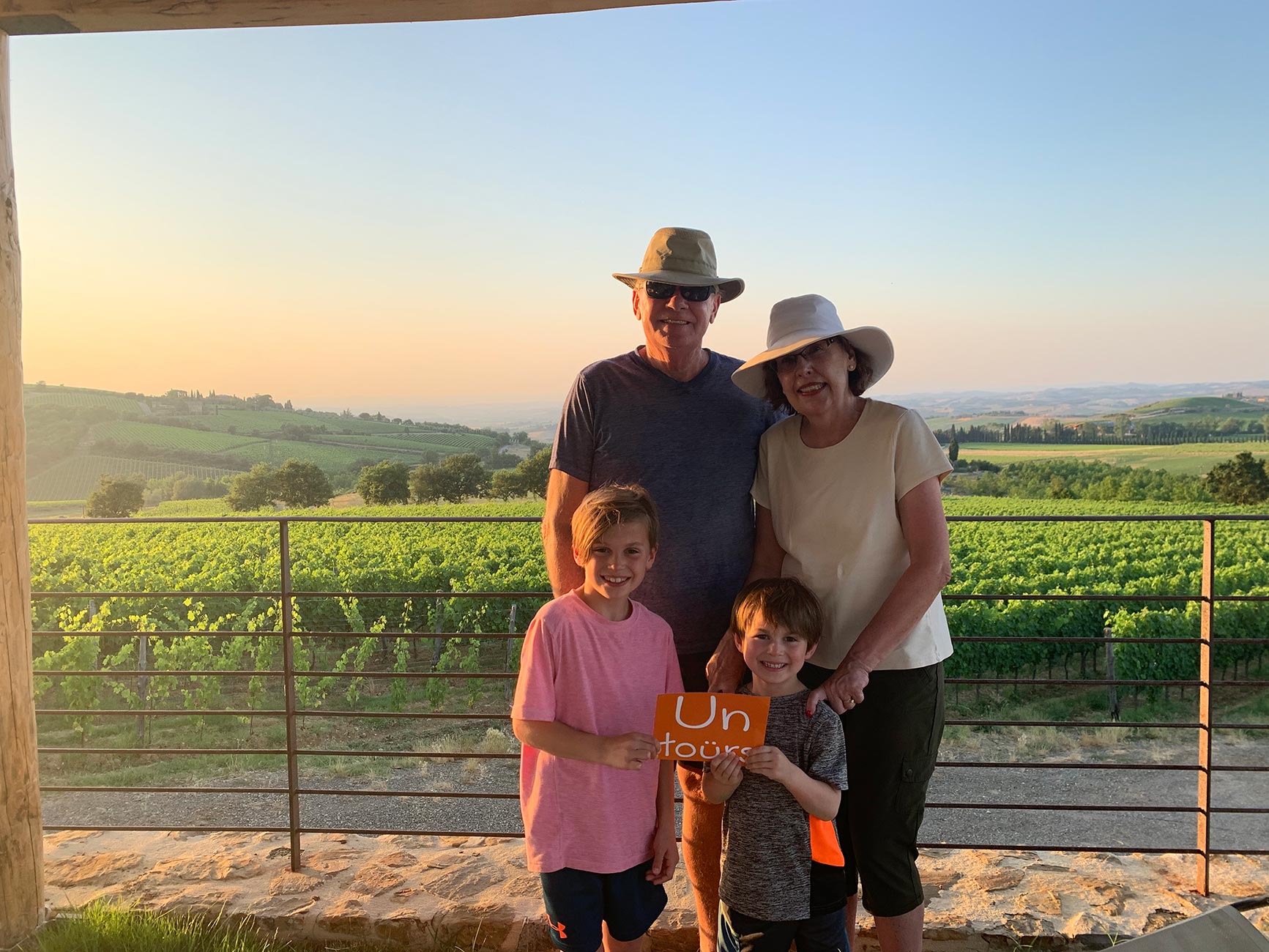 7 Tuscany With Grandma & Grandpa
Le Chiuse, Tuscany Untour
There may be doubters who would send the kids to a beach house. But with Kids Stay Free, a trip to Europe is within reach. A farmhouse in Tuscany is a perfect setting for a family adventure. The Ninivaggi family joined (grand) parents the Kennedys for a multi-generational summer trip to remember! The kids enjoyed sunflower fields, hill towns, and hanging out on the farm. 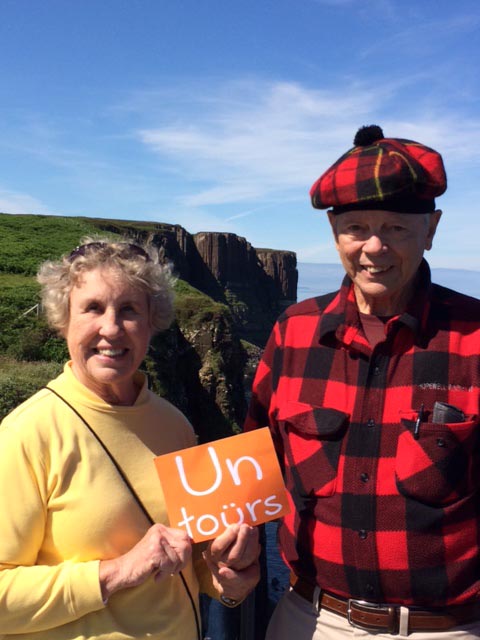 8 Kilt Rock, Scotland
The Central Scotland and Scottish Highlands Untours
James and Diane Wardrop spend two weeks with us in Scotland, enjoying time on both of our Untours there, the Central Scotland Untour based in Stirlingshire and the Scottish Highlands Untour, based in Inverness in the Highlands. They got in on the tartan action and enjoyed scenic drives through the mountains and along the coast, including this cliff side stop in front of Kilt Rock. If you look closely you’ll see where the name of the rock comes from.

9 Lowlands
Belgium and Holland, Dutch Untour
Roger and Mary Ann Bosky joined Jeanette England and had lots of fun with the little orange sign, carrying it all around the Netherlands and into Belgium, on train trips in the lowlands. Staying two weeks in Leiden on their Untour, they had time to make the most of the included Benelux rail pass and cross the border on longer day tips. 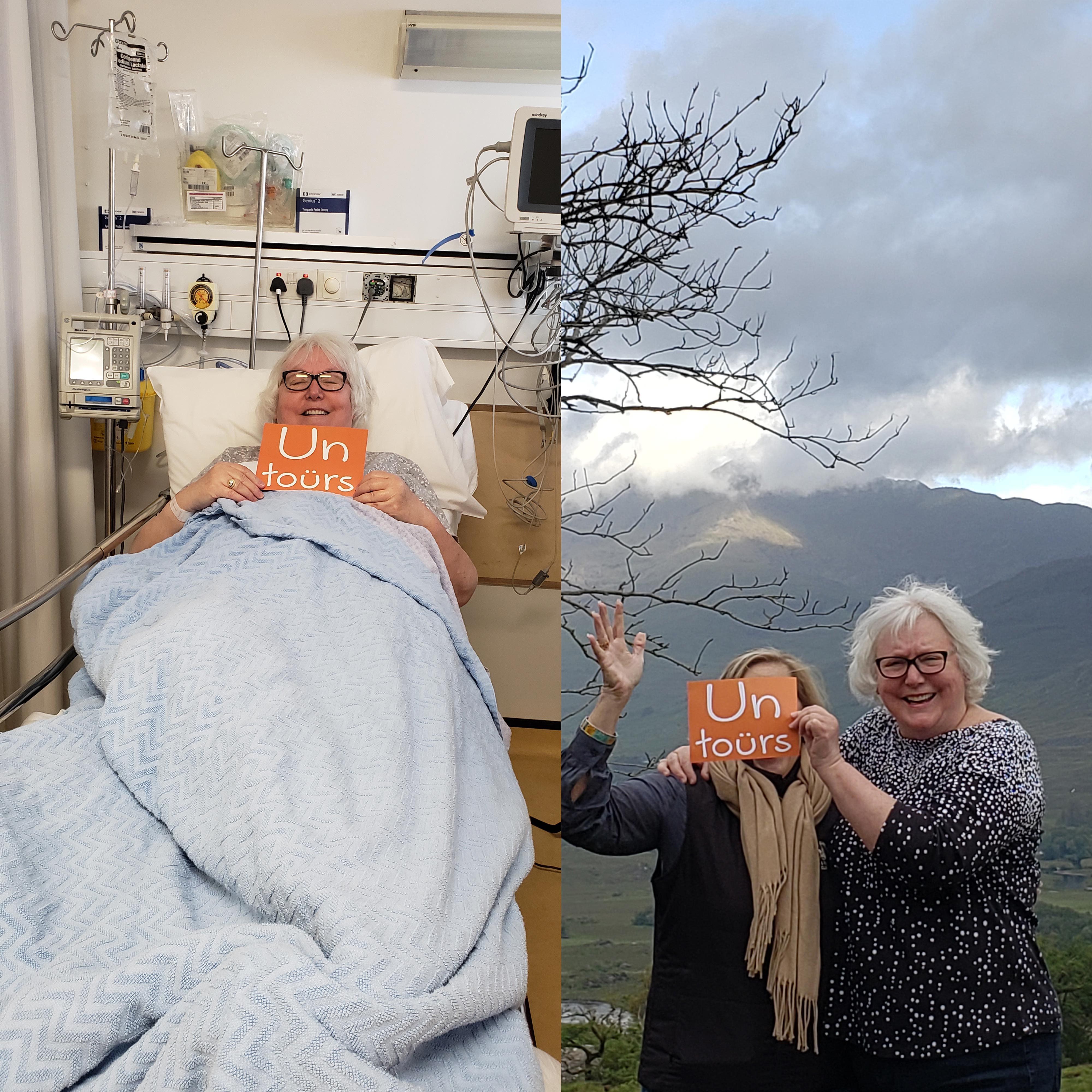 10 Ireland ER: Before and After
Country Kerry, The Ireland Untour
Jackie Johnson encountered some difficulty on her recent Untour to Ireland. She is a veteran Untourist and has Untoured Ireland twice before. (Her travels and sense of humor are well documented on the Untours Blog!) On this trip with her cousin Michelle Myers, she ended up in a hospital in Cork for kidney stones. Check out her recent blog post, for photos of before and after fun. 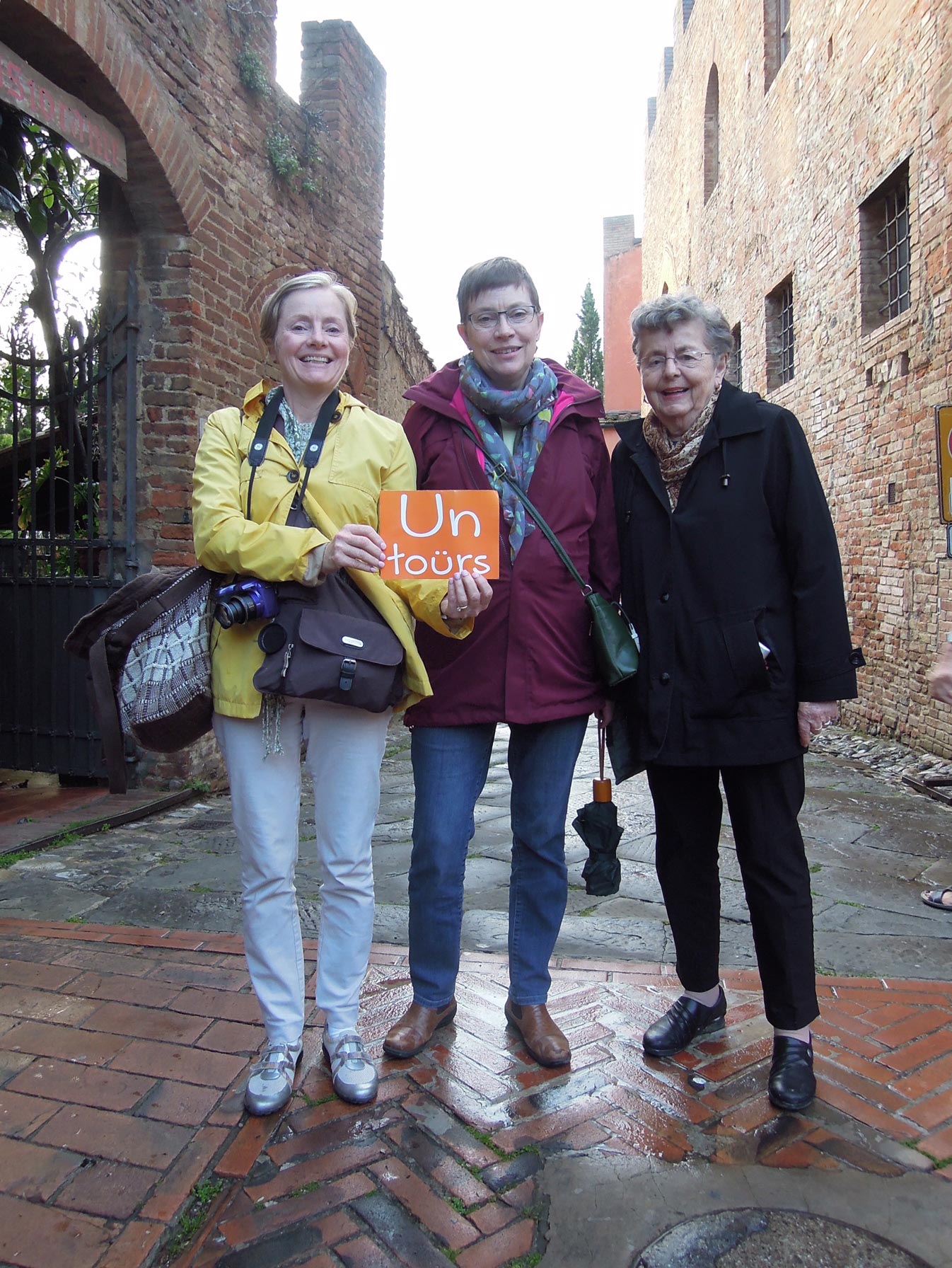 11 Mother-Daughter Tuscany
Tuscany Untour
This photo of Margaret Farwell and her daughters came in an email labeled “Three happy gals in Tuscany.” The ladies stayed at Il Pozzo, a comfy homebase in the tiny village of Murlo. We love intergenerational travel and know trips like this make indelible memories. 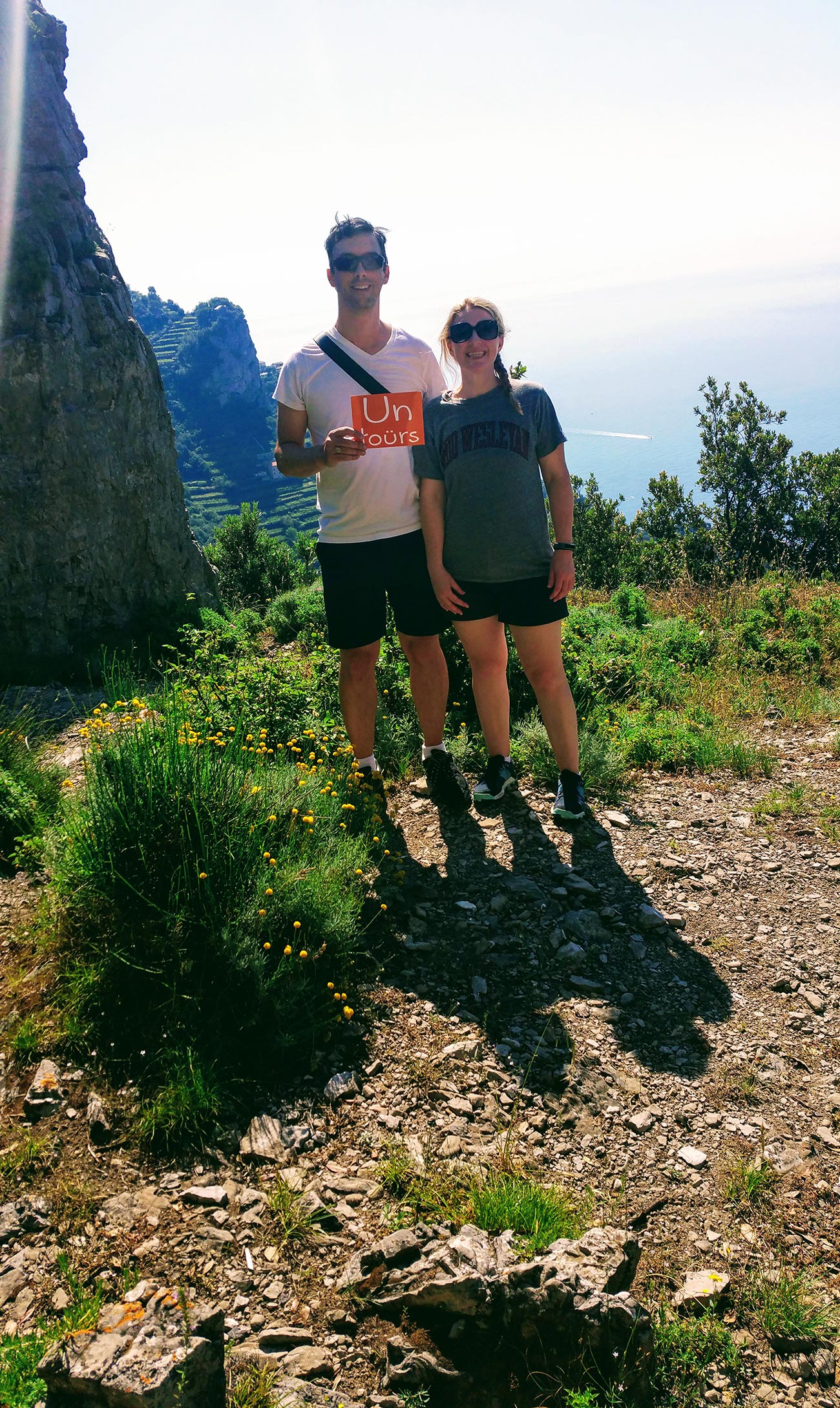 12 Hiking Amalfi
The Amalfi Coast Untour
The Amalfi Coast is a dream for hiking. Mindy and Dylan made the most of it. This photo is from Il Sentiero degli Dei, the Path of the Gods. They told us “You can tell it is relatively early in the hike since we are both smiling. We went off course at one point and added a couple of extra miles to our day.” We trust the views were worth it!

Thanks to these Untourists and all the other wonderful contributors, who regaled us with humorous and lovely shots of their European adventures.

Voting is now closed, but keep checking the Untours Blog! We will announce the winner shortly.