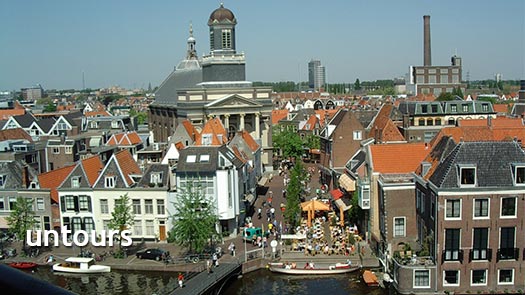 For many, Holland calls a distinct picture to the mind’s eye of a legendary little boy with his finger thrust bravely into a hole in the dike, determined to save the sleeping village. Along the edge of the dike there are cheerful tulips, and a windmill turns its sails on the horizon. Look, the boy’s shoes are made of wood!
It’s just a story, and an American story at that, the imaginary creation of an American author who never set foot on Dutch soil. Still, the picture is real. That fictitious little boy up there on the dike really does live in the hearts of generations of children who have imagined him up there, shivering through the night. Through him, we have learned just a tiny bit of the story of Holland’s courageous stand against the sea.
It’s true that most of Holland’s windmills have been replaced by modern electrical pumps, but the landscape of modern Holland is sprinkled with 950 remaining windmills, many of which are working mills. Though you will surely be inspired by the dramatic landscapes of the Kinderdijk or Zaanse Schans, you don’t have to go far from our Dutch Untour homebase to see windmills. There are two right in Leiden. Step inside De Valk, Leiden’s museum in a windmill, and you’ll begin to understand why the Dutch speak so reverently of their mills.
Not only does tulip season last a mere couple of months, but most of Holland’s flowering bulbs are grown for what’s beneath the ground, their blossoms clipped in mid-bloom to better nourish the bulb below. To be sure, a field of tulips in spring might give you a whole new perspective on the color red, but you don’t have to visit in the spring to see that flowers are a part of everyday life in Holland. You can visit the world’s largest flower auction or picturesque flower markets. Along the way, you’ll see people riding their bicycles with a bouquet of flowers in one hand, and there’s hardly a window without a vase in it.
As for wooden shoes, well, some people think they’re only part of long-ago Holland, but that’s not quite true. People wear them in Hindeloopen, where native costume is part of everyday attire; we once saw a construction worker at an active site in Amsterdam sporting a bright yellow pair. And see for yourself, the shoemaker at Zaanse Schans can carve a pair in just a few minutes.
But put away your books and maps. Sit back and watch the countryside unfold beyond the window of your train. Everywhere there are fields, every field surrounded by water. Look, over there! Someone is crossing the bulb fields in his klompen.
Holland has world class museums and Gothic cathedrals, and miles of beaches and bicycle paths to explore. There are peaceful canals, flanked by gabled guild houses, and so many cozy cafes. You will discover that windmills, wooden shoes and tulips are only the beginning of the story.
Make Holland yours and discover the real Netherlands on a Dutch Untour.