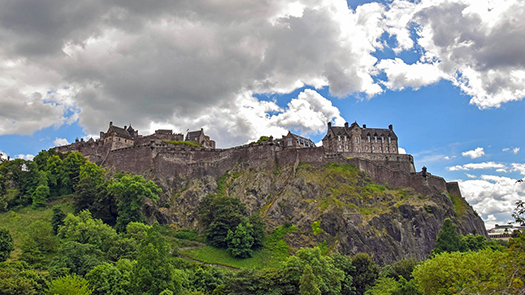 Edinburgh is a majestic, regal city dominated by history and the academic life of its universities. In its dramatic topography, convivial street life, and stunning architecture, you’ll find a lot to love about Edinburgh. Whether you are joining us in the Scottish Highlands, spending time in our Central Scotland Untour, or combining both locations in a Scotland Sampler, you will want to make time for Edinburgh.
Here is part 1 in our Edinburgh series, on sights in the Old Town.
Edinburgh Castle sits atop a volcanic rock hilltop shaped into a “crag and tail” by glaciers. There has been a defensive fortress on the site since ancient Roman times. The castle has served as royal residence and military garrison, with a history that spans too many wars and eras to capture here.
We strongly recommend you read up on the castle before your visit and plan your “attack” with information from the castle’s website: https://www.edinburghcastle.gov.uk/visit.
As you approach the main gate, you’ll see statues of William Wallace and Robert the Bruce on either side. They’re just two of the warriors who have passed through. Allow yourself a good two to three hours to visit this important castle, and take advantage of the audio guides or a guided tour, to help fill in the history and context of the site.
The Royal Palace was built in the 15th and 16th centuries. It houses the crown jewels of Scotland and the Stone of Destiny. Enjoy the views from the Castle Rock and imagine all that these stone walls have witnessed. 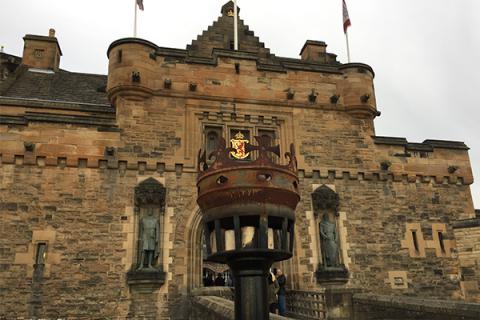 Do not miss the major sights, which include the Scottish National War Memorial, which honors fallen Scottish soldiers from the time of World War I and onward. The National War Museum documents the military history of the country through paintings and relics, including some of the elaborate regimental uniforms.
Be sure to see the notable artillery like the 15th-century, 7-ton Mons Meg gun and the canon at the Mills Mount Battery, which fires daily at precisely 1pm.
St. Margaret’s Chapel is the highest point on the castle grounds and the oldest building in the city. Tour it, the Great Hall, and the Royal Apartments. The Castle Vaults have been used as a prison for centuries and now replicate a historic prison.
Not far away, on Chambers Street, the National Museum of Scotland will fill in more of the city’s history. It occupies two buildings, one Victorian and one modern, and covers Scottish history from its earliest days. Exhibits also cover natural history, archeology, and ancient art. It is a massive museum that requires time and stamina. 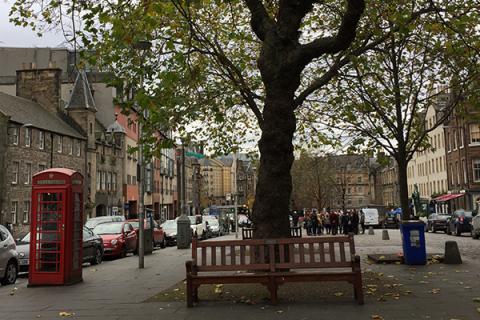 The city’s most touristed stretch is the Royal Mile, the historic street that runs from Edinburgh Castle to Holyrood Abbey, and there are a number of interesting sites to see along the way.
St. Giles, the seat of the Church of Scotland, is chief among them. This massive cathedral was built in waves between the 15th and 19th centuries and its distinctive gothic crown spire looms over the Royal Mile. Scottish Protestantism was cultivated here in the 16th century, under the preaching of John Knox during the reformation.
As you descend the Royal Mile, be sure to meander into the little courtyards and alleys that lead off of it. In the 17th century, growth of the town was constrained by the city walls, so houses were built upwards, creating the world’s first skyscrapers. Some are over eight stories high.
These tenements teemed with people from upper and lower classes, and you can imagine life in the 17th century here as you duck into intimate alleys and courtyards that lead off the main street. Follow Lady Stair’s Close to the courtyard where you will find the Writers’ Museum, where you can learn more about Robert Burns, Robert Louis Stevenson, and Sir Walter Scott in an old, atmospheric house. 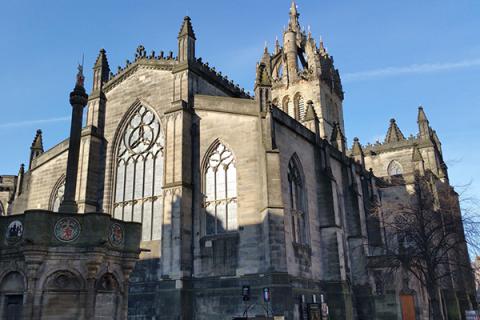 For a glimpse into 17th century tenement life, you may wish to visit Real King Mary’s Close. Here costumed actors will lead you through the preserved underground streets and houses and share a bit of lore about life in the 1600s. It’s an eerie and intimate experience. Timed tours fill up, so book ahead. https://www.realmarykingsclose.com/
At the foot of the Royal Mile, you’ll find the Palace of Holyrood, which was the home of Mary Queen of Scots. You can visit her bed chamber, the royal apartments, and the Great Gallery, which displays royal portraits. You’ll even see the site where Mary’s private secretary, David Rizzio, was murdered by her jealous husband. An audio guide gives context. The Palace continues to host the royal family.
Nearby, Canongate Kirk cemetery is the resting place of Adam Smith, Robert Fergusson, and other notable Scots. 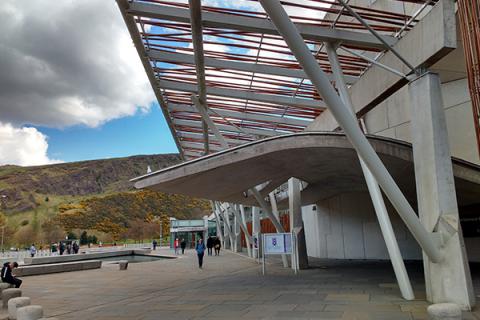 In stark contrast stands the Parliament building, an interesting piece of contemporary architecture that houses the Scottish Parliament. It hosts free tours and houses a gallery and cafe that are open to the public.
Holyrood Park offers some wilderness in the city. Arthur’s Seat looms above it all, the extinct volcano easily visible from all over the city. You can hike up from Holyrood in about 45 minutes. It is a steady uphill climb, but it is worth it for the sweeping views of the city it affords.
And that is just the Old Town! During your Central Scotland Untour, you’ll want to take advantage of convenient train connections to zip into Edinburgh more than once. Stay tuned for Part 2 of our Edinburgh coverage, the New Town. And start planning your Scotland Untour now!