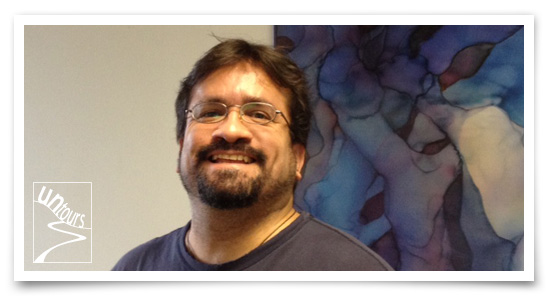 Back in August, Dodge Amaral, Director of the Buenos Aires Untour, made a trip to Argentina to contract new apartments and connect with our local staff person, Graciela Nealon. At the time, the seasons were the reverse of now. “Though being there in early August meant relatively cool temperatures, it was honestly a lovely respite from the hot and humid Philadelphia summer.” Here Dodge answers some questions about his trip and about Buenos Aires, a city he loves.

Q: What is something you are sure not to miss when you have the chance to return to Buenos Aires?

A: Even though popular, hence crowded, if you’re in Buenos Aires on a Sunday, a trek to the Feria de San Telmo (page is in Spanish), the San Telmo district’s huge antique fair/flea market/social gathering is a must. You can browse among old knick-knacks, books and housewares, which even include the gourds and straws used for the ubiquitously drunk tea called maté. There are also troupes performing tango, a variety of street food and outdoor dining options. And, of course, a parade of people to watch come and go.

Q: How is Buenos Aires different from our Untours in European cities?

A: In many ways, Buenos Aires is very much like a lot of our European Untour city destinations, and that’s part of its allure. So much of what tourists see, hear and taste culturally when traveling there–architecture, art, food–can be compared with Europe simply by means of Argentina’s close ties with Europe historically. In particular, the huge late 19th and early 20th century influx of immigrants from Europe to Argentina, especially Italians, has made an indelible mark on Argentine culture, particularly in its food and café culture.

However, as European as Buenos Aires does seem, there are certainly unique elements to Buenos Aires culture. Tango is an example which came not out of the world of wealth but from the poor and working classes of Argentina. It was derided by the upper classes at first only to eventually become a signature part of Argentine culture. If anything, tango can more readily be compared to the origins of jazz music in early 20th century America than any other phenomenon in my view.

Also, Argentina is considered a developing country economically and, for that reason, Untourists to Buenos Aires will find the costs of being a traveler, especially eating out and getting around, to be quite inexpensive compared to Europe. However, most Untourists would be surprised to know that right before the Great Depression, Argentina was one of the wealthiest nations in the world, wealthier than most of Europe. So there’s a pride you can sometimes feel among Argentines who view their nation as distinctly different from its South American neighbors.

Q: What are your favorite neighborhoods in Buenos Aires? 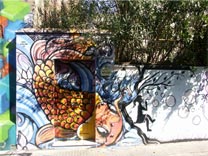 A: Having grown up in the shadow of New York City, I find that two neighborhoods in particular, the Soho area (part of the huge Palermo district) and the Recoleta district are my favorite. I find them both comparable to two of my favorite NYC neighborhoods, Greenwich Village and the Upper East Side. Buenos Aires’ Palermo Soho has a distinctly bohemian feel with a variety of art, both of the street and gallery variety, as well as quirky shops and restaurants that, for me, hearken back to my early adult years visiting Greenwich Village.

However, I also enjoyed visiting the Metropolitan Museum of Art and the upscale neighborhoods near Central Park and the Upper East Side of Manhattan, and I find that the Recoleta area of Buenos Aires gives me feelings of déja vu. For some reason, I love the juxtaposition of both sets of neighborhoods and how, in some respects, visiting Buenos Aires makes me long for New York City. Odd isn’t it?

Q: What is your favorite thing to do in Buenos Aires when you have leisure time?

A: Though it’s one of the city’s most popular attractions, I still enjoy spending time wandering around the La Recoleta Cemetery, a veritable city of the dead, laid out in a grid-like fashion with tree-lined “streets” and alleyways lined with mausoleums. Yes, most visitors specifically look for the Duarte family mausoleum where Eva Peron (Evita) is buried. However, the sheer variety of mausoleums and the architectural styles they encompass–Art Deco, Art Nouveau, Baroque–makes turning around any corner a visual joy in and of itself. The economic issues and the cost of maintaining these elaborate and opulent mausoleums has meant a lot of mausoleums end up in disrepair. The contrast, seeing pristine marble statues overlooking crumbling tombs, can almost be arresting, an intriguing visual display to say the least.

Q: What are your favorite local food and drink?

A: Given the heavily Italian influence on Argentina’s cuisine, I can honestly say I’ve had some truly fantastic pizzas and pasta dishes in Buenos Aires, both of which can either be paired with beer, brought to Argentina originally by Alsatian immigrants (Quilmes in particular) or wine, be it the heady reds associated with the Malbec grape or the distinctive Torrontes white, which reminds me a little of the Gewurztraminer wines I’ve had in Alsace.

Otherwise, if you’re out and about, it’s hard to beat my favorite street food, empanadas, the stuffed savory pastry that can be found in much of South American. They are much like the ones I had growing up in a Brazilian household, but the Argentines do them very well. If you’re visiting the Feria de San Telmo, don’t be surprised to encounter a few dozen vendors selling these wonderful snacks. And at 5 pesos each, a few dollars will cover a nice mid-day lunch.