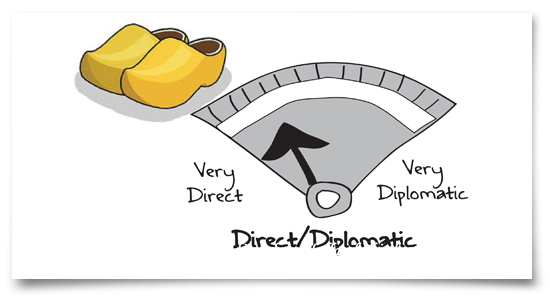 Perhaps the biggest culture difference that most visitors to Holland notice (in social behavior) is what some call the “Dutch directness.”  Our Dutch team here at Untours says:

“They always speak their mind and ask questions that most would deem personal. This gives the impression they are rude or crude–attributes they refer to as openness. What may strike you as being blatantly blunt topics are no more embarrassing to the Dutch as discussing the weather.”

If you explore conventional wisdom on the subject of Dutch directness, (just Google ‘Dutch directness’) you’ll hear a general consensus that, yes, indeed,  the Dutch are quite likely speak their mind.  Few would accuse the Dutch people of mincing words. They tend to say things that, in other cultures, might be considered “better left unsaid”. Religion, immigration, politics, money, for a good portion of the Dutch,these are all topics considered wonderful raw material for a lively debate.

The Dutch may be one of the very few cultures that experience Americans as “beating around the bush” about many topics. Since Americans are, by general consensus, usually experienced as some of the bluntest people in the world,  heaven  knows what the Dutch make of a culture like the Japanese or the British, where much more is left unsaid!

To not have an opinion, for many Dutch, seems more of “faux pas” than nearly any opinion you could have.  ‘Telling it like it is’ is a widely held value in Holland; staying mum, changing the subject or couching your words carefully can, for a Dutch person, seem insincere or hypocritical.For the Dutch, this value feels as if they are being forthright, truthful, straightforward and just plain honest. For someone from another country, this exact same behavior might be experienced as gruff, impolite, rude, unmannerly or just plain insulting.

Which is it?  The answer, as in most complex issues, is “It depends.”  The thing it depends on the most is where your own comfort zone is.  Last week the Culture Clue post talked about the fact that cultural understanding begins by knowing your own culture.  Only when we shift our own “automatic pilot” rules over into a more conscious gear can we begin to avoid some of the most common triggers for culture shock.

In the case of Dutch directness then, we might ask ourselves, “Where am I on the behavioral range between ‘direct’ and ‘discreet’?  In my personal case, I grew up a family where religion was central and a much discussed topic, inside and outside of church.  Dinner wasn’t really dinner in my family, without one or two theological points being rigorously debated amongst family members.

I married into a family where asking someone about their religion is about as polite as an embarrassingly loud belch in front of the Queen.  For the first few times, when our the two families met, I could see the stunned, offended look in my lovely in-laws eyes as, one-by-one, my fervent, religious, direct and debate-loving relatives would strike up a nice theological discussion as a way to break the ice.

Ouch.  We Taussigs are much more direct (at least on the topic of religion) than my Swedish-American in-laws.  So now I know. That’s my starting point.  Not right or wrong….and not universal.

Now, when I go to places where the culture may differ from my own, I  keep my own ‘directness vs. diplomacy’ radar in active mode, rather than on autopilot. .  I don’t completely abandon my tendency for directness, but, especially when I am a visitor, I listen first, and try to slow down my immediate instincts at least to the point that I don’t cause, or take, instant offense.  Luckily for blunt old me, in Holland, I can exhale and speak my mind.  I then need to remember, as I head to Britain or France, to move back into “Think before you speak” mode.

So before you head off to your  Holland Untour, where the behavior is likely to seem very direct, ease any potential culture shock by asking  yourself, “Where’s my comfort zone?  What do I leave unsaid?  What topics are off limits, or perfectly fine for me?”  Don’t be surprised if you find yourself, once in Holland, taken aback, either by the subject matter, or the bluntness of the comments.

What’s helpful is to remember that you too, bring a certain set of rules into each interaction.   Just as your comfort zone has been shaped by your surroundings, the Dutch have grown up in very ‘direct’ soil.  So, arm yourself with a little self-awareness and a recognition that you are on their turf.  Hopefully, you’ll experience the Dutch as forthright, truthful, straightforward and just plain honest, or, at least, that travelling is a learning experience.  As Proust said, “The real voyage of discovery consists not in seeking new landscapes but in having new eyes.”