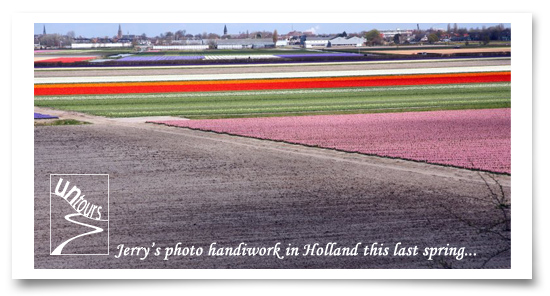 We couldn’t resist.  After last weeks profile of Jerry and Deena we realized we didn’t have room for any of the photos that they always come home with and post on Untours Cafe.

So this Monday, we wanted to share with you their photos from Holland.  There’s something for everybody, from stunning fields of flowers, to stunning glasses of beer, to a lovely shot of one of Leiden’s canal with the old Fish Market Bridge at night, and the biggest bubble blower we’ve even seen!  No need to drive here….as you can see, the natives favor bikes, to put it mildly.

And while we’re speaking of places not to drive,  even though it’s Holland month, Jerry has such a way with the camera, here’s his Amalfi album on Untours Cafe from the previous year. Don’t miss his shots of food, and that clear, clear  water…both almost unearthly in Amalfi.  Not to mention these: Shot A and Shot B, which are inarguable evidence why Untours says, “Don’t drive a car in Amalfi”  And we love to drive….just not here

As we speak the Kofflers are on a Viking Cruise.  You did know that Untours now sells Viking Cruises, right.  Hopefully, they’ll come home with an album full of gorgeous pictures from this trip as well.  If they do, you’ll see them here!