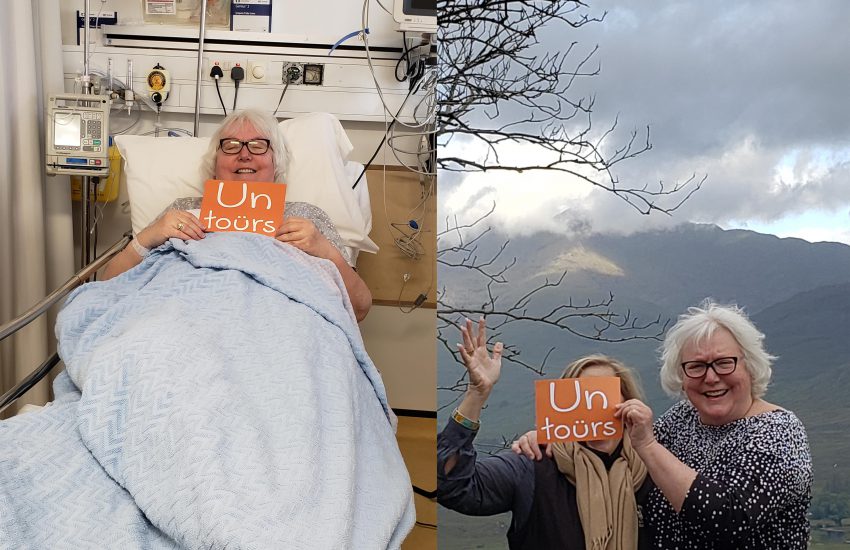 In June of 2019 my cousin, Michelle, and I traveled to Ireland with Untours. We thoroughly enjoyed our apartment, the pubs, restaurants, and shops in the town of Kenmare. The trip started with my luggage not arriving, but that was a piece of cake compared to what was in store for us.

Michelle was incredible at driving on the left side of the road although her knuckles were white from gripping the steering wheel so tightly. She is a polo pony player and said driving in Ireland reminded her of playing polo. I was supposed to be the navigator, but the road signs were so well marked, I didn’t need to do much navigating.

We explored Killarney, Dingle, and the Waterford area. On the way back to Kenmare from our Waterford outing, I got a stabbing pain on the left side of my lower back. It was excruciating. We found an Urgent Care on the outskirts of Cork. I was examined by a doctor, given a super-duper pain pill, told I probably have a kidney stone (my second one), and go straight to the hospital.

I was feeling so good after the pain pill, I told my cousin let’s skip the hospital and head back to Kenmare. Luckily she didn’t listen to me; she drove me to the Cork University Hospital at Wilton.

We checked into the emergency room along with about 15-20 other people. The lovely Irish people enjoy their sports, so we saw several sports injuries including bones ready to stick out through the skin. Screening in triage wasn’t bad, but the halls past the E.R. waiting room were jam packed.

The whole time it was getting dark outside and my cousin was just hanging out in all this. We were tired, so I suggested she find a hotel to stay. It looked like they were going to keep me overnight. (I got to leave 5 days later!)

There were no hotel rooms available in Cork! There happened to be a huge concert going on, and not a room or B&B was available. The hospital front desk tried to find Michelle a room also, and nothing.

My kind nurse found a gurney and a cubbie hole for my cousin to crash in, but in the wee hours of the morning they needed the gurney. Finally I was admitted to a hospital room with 3 other patients. There was no room there for my cousin to comfortably sleep, so she went out to our rental car and tried to sleep in the cold, dark parking lot. Meanwhile, I was getting taken care of in my hospital bed.

It didn’t take long for me to get acquainted with the young woman, Sonia, in the bed across from me. Even though she was in a lot of pain, Sonia made sure I was okay. The staff did not make my bed, but my roommate, Sonia, took care of that. She also untangled me from my I.V. cords when I had to go to the bathroom. Then she untangled my blankets when I messed them up.

Sonia was my guardian angel. When I got to the hospital room, I had a buzzer for the nurse. I don’t know what happened to it, so Sonia was my buzzer and would go get a nurse for me when my I.V. ran dry. When Sonia, and her father-in-law, went for a jaunt around the hospital, they always brought back various Irish candies and treats for me.

I spent five nights in the hospital. Sonia was there with me four of the nights and my cousin stayed at a friend’s home and had a much nicer time. Michelle and I kept in touch via cell phone and texting. I was told I required surgery to have the stones removed. I was hoping they would pass on their own, but four days into it, I was having surgery.

When I was released from the hospital, Michelle and I headed back to our cozy Untours apartment and continued sightseeing. We did a Foodie and Heritage Tour of Kenmare, plus a walk around Cork before we flew home.

In the end it was a great trip. I did leave several kidney stones in Ireland, but the best part of the trip was meeting Sonia. We are now friends and communicate almost every day either by email or Facebook. We have sent gifts back and forth to each other, and I hope to see her again either in Montana or Ennis, just not in a hospital!

I thank my lucky stars for those kidney stones because I got to meet Sonia, and I am also so thankful for my smart and independent cousin who went with the flow.

Jackie Johnson has traveled with Untours to the Netherlands, Switzerland Ticino, and twice to Ireland. She is a regular contributor to the Untours Blog. You can read about her Irish food adventures here.