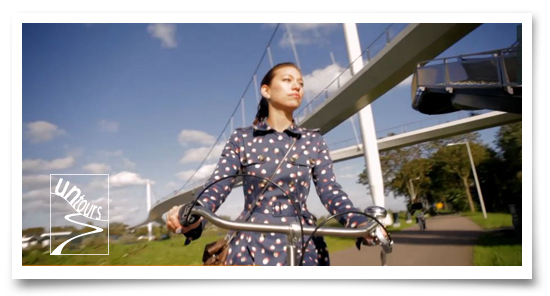 A bicycle bridge in the background, just one display of the awesome infrastructure Holland has created for the bicyclist citizen.

While biking has been prevalent in Holland since the advent of the bicycle, Holland has not always had the bike friendly culture is it now. That was a surprise.  I had always been under the impression that the Dutch just floated along, placidly and pleasantly, from a few bikes, to the massive wonders of bike infrastructure they now have.

No such thing.  People made a fuss, and the society turned around. The video below tells the fascinating story of how a “culture” comes into being due to the persistent insistence of a group of motivated citizens.

The ability for a country, a culture, a public policy, to accomplish real and permanent good is starkly highlighted in one statistic: in 1971 there were 400 children killed in car/bike accidents in Holland.  In 2010, with far more children, bicycles and automobiles, there were 14.

Holland, like nearly every other Western country, began changing its cities to make room for automobile traffic after WWII.  Since its ancient cities lacked the space for cars, a nasty combination of demolition and traffic jams resulted.    Several other factors: the oil crisis of the 70’s, the rise of the protest movement of the 60’s,  and,  most dramatically, sharp increase in child mortality in car accidents, galvanized the Dutch.   A large movement grew up, many of the most active being parents of school age children,  around creating room, in the Dutch infrastructure, for safe biking.

In the second half of the 20th century, most large cities became wedded to the automobile as more people could afford them and the rise of the suburbs made commuting to work an option.   Holland started in that direction as well, and then, consciously, veered away.  Now many cities, whose traffic problems have become unsustainable are looking at Holland to see if their use of bicycles could be replicated.

Could we here in the U.S. do something similar?  We’d face a steeper challenge.  Holland is a small country and a flat country: two things in favor of bicycle use, and two things  you cannot say about the U.S..  It is possible that “bike culture” could work in U.S. cities, but harder to imagine it working in spread-out suburbs or in rural America.  Even in the cities, it would require an immense show of  public will to trigger the kind of changes necessary.

Sound impossible, doesn’t it?  Pause, though, and reflect how drastically the culture of smoking has changed in the U.S.. over the past two decades.  What was totally normal a generation ago will get you in trouble in a jiffy now!   Remember how smoking, even on an airplane, was perfectly OK?  Seems absurd now, doesn’t it?

Yet, if you’ve spent time in Holland, you’ll be a witness to a similar sharp turn that the Dutch took, much in the same way that  Americans changed their thinking on the issue of smoking.  When you are there (on a Holland Untour, perhaps?)  it’s immediately apparent what a big difference such a change  — consistent public policy to achieve a goal  —  can make over decades.  When various forms of transportation (bicycle and train)  are given equal status and place as the automobile, there’s a palpable difference.  The congested cities, especially, seem amazingly better for it.