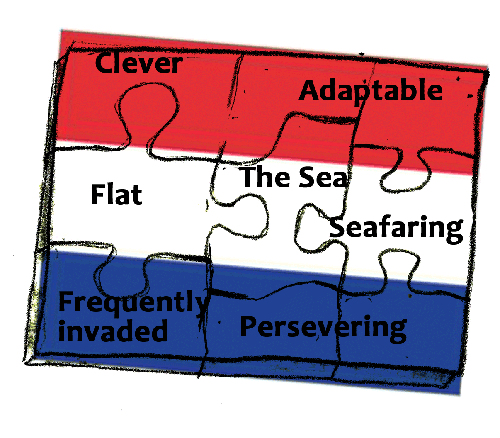 One of my favorite definitions of culture is “Groups of people solving problems over time.”.

It’s an interesting puzzle to take a glance at Dutch ‘problems’ throughout their history, and deduce from the solutions they found, what sort of culture is the result.

Wikipedia, described the Dutch, in its first paragraph as ‘a seafaring people living in a watery lowland.’  Therein lies a key to core of the Dutch character.

Because they were a people living in a watery lowland, they learned to wage a battle with the sea.   Besides learning to be excellent sailors, they realized (as early as the 20th century) that land which was frequently flooded, was also land that, when it wasn’t flooded, was fertile.  In a highly populated land, fertile land is a prize.  So the Dutch began finding ways to drain lakes and hold back the sea, with dikes and ditches as early as the 9th century.  By the 15th century, the polden windmills were largely put to use, pumping water off of the land, allowing it to be planted (And you thought those windmills were there because they were so cute!).  For the Dutch, with few other natural resources than this watery lowland and their wits, and a great many mouths to feed, it was sensible problem-solving that evolved into two traditions:

Because they were a people living in a watery lowland, they got invaded a lot.  The history of Holland is, in some ways, a history of invasion.  With few natural barriers to stop an invading army, Holland has been passed around among greater powers (England, France and Spain, primarily) for the better part of the last millennium.  Earlier in history, Vikings swarmed through this part of Europe with impunity.  With waves of conflict rushing over your homeland for centuries, the Dutch, among their many skills, not surprisingly became skilled at surviving invasions.

One period of domination, when Holland was held by King Phillip of Spain, was particularly formative.  King Phillip of Spain was a ferocious defender of the Catholic faith, and, in an age where the Reformation was sweeping through the European continent, many of the Dutch quickly became adherents to the new sects of Anabaptists (forerunners of the Baptists of the United States) and Calvinism.   A giant clash of wills, between Phillip and the Dutch was inevitable.  In the war that followed the modern nation of Holland was formed. (The seeds of the divisions were sown then, as well,  between it’s largely Protestant North and Catholic South that can still be seen today.)

By the time, the Nazis invaded Holland, Holland’s people had seen war, and invasion in their country for nearly every generation,  going back centuries.   The citizens of such a country must have known, intuitively both how to hunker down and hold to traditions that mattered.  How to adjust to the new invaders in ways that allowed one to survive must have been a lesson learned with the ABC’s.

It is not surprising that two of the strongest themes used to describe Dutch character are individualism and pluralism.  The one and the many.  Not a bad way to survive, when you live in a land that is easily swarmed.  The Dutch Resistance in WWII is rightly held as a testament to the Dutch character.  Many of our Holland Untourists praise the the small and thoughtful Verzetsmuseum (Dutch Resistance Museum) when they visit Amsterdam.  There may not be any individual’s story who symbolizes the strength of the Dutch character, as it has been honed over centuries, than that of Anne Frank. In both her character, and that of the many non-Jewish Dutch who harbored Jews in the Occupation, you can see the value of individuality and pluralism.   The Dutch have learned to battle against forces far larger than themselves, and if victory does not come, they have learned to hold on, and to reclaim and recover.

Today, Holland is still a place where everyday, you will see striking examples of individualism  (The Dutch are often said to positively enjoy a spirited argument.) and of pluralism.  Perhaps more than any other European country, while immigration has and continues to prove a huge challenge to their society, they are not taken by surprise by diversity in the same way as some of their European neighbors have been.   Seemingly, one of the only things that does take a Dutch person aback are when they encounter world view where pluralism is rejected and there is a belief in  only one ‘right’ way.

Which leads us back to our where we started.