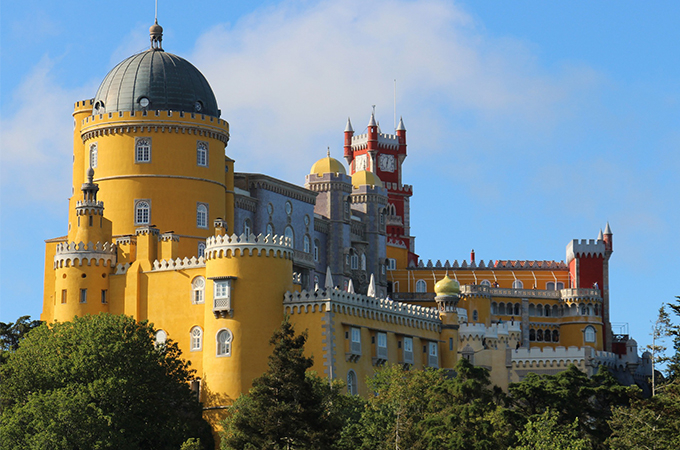 On the outskirts of Lisbon, the village of Sintra is so full of sights, it almost overshadows Portugal’s capital city. We based our central Portugal Untour here for good reason! Here is a quick rundown of the town’s major sights.

The Palácio Nacional
Formerly a summer haven for the royals, the palace dominates Sintra. It seems to say, “You must pass through here before you go anywhere else”. Its two immense tower-like kitchen chimneys are a Portuguese landmark.

The Castelo dos Mouros
Looking down on Sintra from the top of the ridge, all that remains of the Moorish castle are restored ruins of its walls. But by walking along these walls, you can see south to Setúbal, north to the Berlenga Islands and west beyond Cabo da Roca.

Palácio da Pena
This romantic fairytale palace built in the mid 1800s around the ruins of a 16th century monastery encompasses a mixture of architectural styles. Moorish, Gothic, Neoclassical, Manueline and Renaissance are intertwined in its cupolas, towers, walls and windows. The royal apartments are preserved just as the Portuguese royal family left them when they fled the country ahead of the revolutionaries in 1910. A giant statue of its German architect Baron Eschwege admires his work from a neighboring peak.

The Palácio de Seteais
Once the home of the Dutch Consul, it is now a luxury hotel. The outside is impressive; to see the inside, try tea or cocktails. It is a fifteen-minute walk from the Tourismo. Seteais translates to “seven sighs.” Along the way you will pass the recently restored Lawrence’s Hotel where Lord Byron stayed on his visit in 1809. Then a few hundred feet farther on your left, is the spectacular “wedding cake” Quinta da Regaleira. 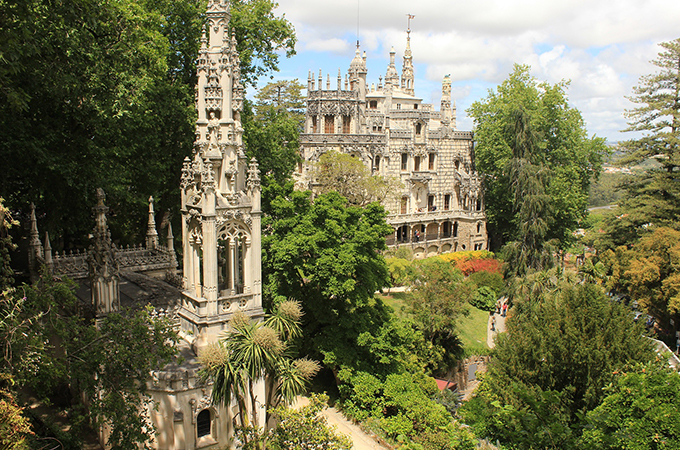 Quinta da Regaleira
Located in the Old Quarter of Sintra and classified as a World Heritage Site by UNESCO, the Quinta da Regaleira is one place not to be missed. Built at the turn of the 20th century, it is a true treasure of Gothic, Manuelin, and Renaissance architectural styles and has lovely gardens rich in mythological symbolism. Be sure to prearrange a tour with an English speaking guide and wear comfortable shoes. The tour last a few hours and involves walking, climbing, and being in narrow spaces but is absolutely worth it to get the most out of the visit.

Monserrate Palace and Gardens
Sir Francis Cook, a very rich Englishman, spent a fortune in building his eclectic Moorish Revival palace and surrounding gardens. For the gardens, he accumulated plants and trees from as far away as Japan. The gardens are famous worldwide. The paths, streams, waterfalls, and an occasional ruin make for a delightful walk. The palace itself is a delightful homage to the Alhambra and other Moorish masterpieces. It is two miles farther on down the road from Seteais.

The Convento dos Capuchos
The tiny cells and rooms of this most unusual convent are carved out of the rock and lined with cork. Last occupied in the mid 19th century, it is worth a visit. We like to imagine that the most junior hermit was assigned the task of going into Sintra for supplies. It is 5 miles from the center of Sintra on the road that leads to the Pena Palace.

Stay in Sintra on a Portugal Untour and take the time to appreciate all of these colorful sights, and spend your extra time venturing into Lisbon, exploring the natural parks and coast, and discovering the country’s interior.

Combine Sintra with a week in Porto to take in the northern part of the country and see the wonders of the Douro Valley and the border region. Happy travels!