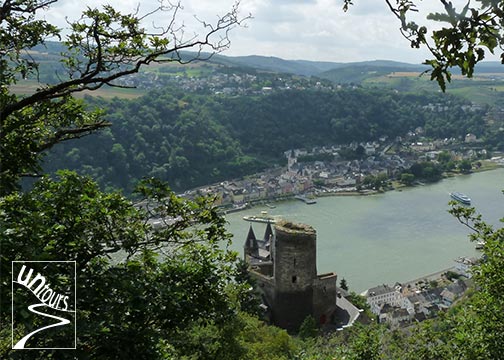 At last count, Germany has 39 UNESCO World Heritage Sites within its borders, making it one of the world’s top five countries for UNESCO-recognized riches.
UNESCO stands for the United Nations Educational, Scientific and Cultural Organization. Its mission, in brief, is to foster dialogue and understanding among different cultures, civilizations and people. With their World Heritage Site program, they recognize specific areas that are of global importance because they capture a unique aspect of human creation, a historic time period, a civilization past or present, natural beauty or biological importance.
While there are too many German World Heritage sites to include in one post, here is a list of sites that are easily accessible from our two German Untours.

From the German Rhine Untour:

Upper Middle Rhine Valley
Our Rhine Untour is located in the heart of this UNESCO site, in the 65 km middle stretch of the Rhine Valley. This zone of castles, vineyards, and historic towns captures the long-surviving local culture and its interaction with the beautiful natural landscape. It is uniquely German, and has been a quintessential part of local legend, history and artistic development.
Trier
Founded in the 1st century AD, Trier was a key Roman trading center and grew in importance in the following two centuries. Many important Roman structures survive today. Those monuments, the Church of Our Lady in Trier, and St. Peter’s Cathedral make up this remarkable site.
The Cologne Cathedral
This magnificent cathedral is recognized as an important representation of Gothic architecture. It is a masterpiece that was built and modified over seven centuries, from 1248 until 1880.
The Bruhl Castle
The Augustusburg Castle and its surrounding gardens were the residence of the prince-archbishops of Cologne. This 18th century castle and the nearby Falkenlust hunting lodge are among the earliest Rococo buildings in Germany.
Aachen Cathedral
Construction of this cathedral was started around the turn of the 9th century by order of Charlemagne. Its octogonal shape and architecture were inspired by churches in the eastern reaches of the Holy Roman Empire. The structure was expanded in the Middle Ages.
Messel Pit Fossil Site
Important scientific discoveries continue to be made in this former quarry. The fossil pit in Messel is one of the world’s most important natural sites for understanding the Eocene environment, 57 – 36 million years ago. Its well preserved fossils provide critical information on the early evolution of mammals.
The Lorsch Abbey
This abbey and its monumental Torhall entrance offer a rare glimpse of architecture from the Carolingian era. The site includes well preserved sculptures and paintings from the time. It was founded in the 8th century.

From the German Castle Unour:

Margravial Opera House in Bayreuth
Built in the mid 18th century by Italian architect Giuseppe Galli Bibiena for Frederick III, this perfectly preserved theater stands as a monument to Baroque music festival culture. Scholars note that it maintains the original acoustics of its era.
Regensburg
Heralded as Germany’s best preserved medieval town, Regensburg’s notable structures include its 12th century Old Bridge, city hall, and cathedral. The town’s beauty exists in its narrow lanes, fortifications, housing stock, and monuments built between the 11th and 13th centuries. The town was an important trade center even earlier, and notable ancient Roman, Romanesque and Gothic structures remain.
Bamberg Old Town
This town has held historical importance for the Slavic people, notably those from Pomerania and Poland. As it prospered in the 12th century and beyond, its architecture had strong influence in northern Germany and Hungary. It became a center of the 18th century enlightenment, when philosophers like Hegel and Hoffmann lived here.
Wurzburg Residence
This important baroque palace, with its gorgeous court gardens, was built in the 18th century with the help of an international team of architects, painters, sculptors and artisans. It is one of Germany’s largest and most important palaces.
Upper-Germanic Roman Limes
The remains of the Roman Limes represent the frontier of the Roman Empire in the 2nd century AD. The site today includes fortresses, watchtowers, walls and remnants of residential settlements in various states of excavation, reconstruction or decay. Germany’s two sections of the border run 550 km, stretching from the northwest to the Danube in the south.
World Heritage Lake Dwellings in Bavaria
The prehistoric stilt house settlements in and around the Alps are a cross-border UNESCO World Heritage site. They were built circa 5000 to 500 BC and clustered on the edges of rivers, lakes, and wetlands. These pile dwellings are the first underwater archaeological sites to be recognized, and they offer important insight into the life of early agrarian cultures. Of the 111 sites, three are in Bavaria.
Church of Wies in Pfaffenwinkel
The Pilgrimage Church of Wies was constructed in the mid 18th century and stands as a perfectly preserved example of Bavarian Rococo architecture. It is the work of Dominikus Zimmermann and its beauty is enhanced by its Alpine valley setting.