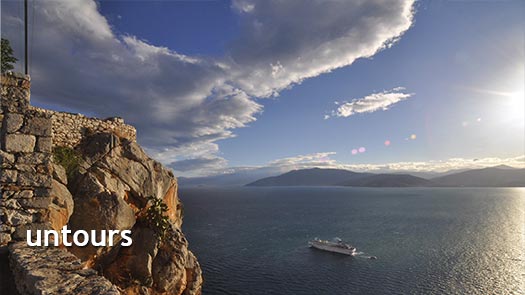 In 2013 Steve Somerville returned to Greece for his second Untour there. He has enjoyed many Untour destinations over the years. Here is his account of Greece the second time around, along with some of his photos from the trip.
Not long ago, my friend Lynne and I returned to Nafplio, Greece, for our second Greek Untour.  We stayed in the Poppy apartment on St. George’s Square. We returned to Nafplio because we realized that we had much more to see even though we had spent two weeks there in 2009. We also wanted to revisit one site seen previously, Epidaurus, just 35 minutes away.
Again I was thrilled to see the theater. I love to wander through the excavation and to ponder how incredible this enterprise must have been at its zenith in the 4th century BC and to experience its impact today.

We visited other venues, most notably an overnight trip to Monemvasia and a stay at the Malvasia Hotel located in the ancient castle in the lower city. Christos (Untours on-site staff arranged for Lynne to visit a feta cheese factory, and we learned that the sheep and goats would not be producing milk for two weeks. Feta is seasonal!
We greatly enjoyed a day with our Greek doctor friend who took us to Alallum, a great restaurant in Nafplio. Truly Greek. Get the salads.
I took great pleasure in watching Greek families walk across Syntagma Square on Friday and Saturday nights. Lynne and I learned that there was really no evidence in Nafplio of Greece’s economic problems. On the contrary, the infrastructure was improved and commercial activity was clearly a notch above the 2009 level.
In early October the skies were clear all day except one and it was a comfortable 80 degrees daily, with evening breezes off the sea. 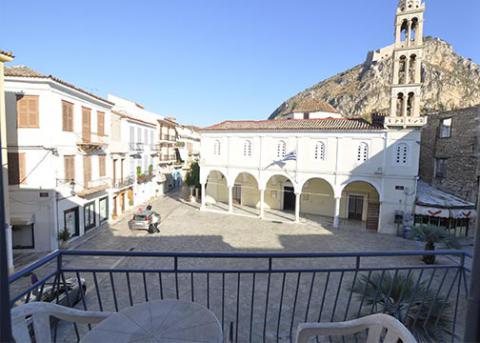 We witnessed a huge Greek wedding on the church square from our balcony. On our final day we visited the Palamidi fortress above Nafplio. It provided the best photo ops of the trip. We then went to Athens for a few days. Were there negatives? None major. The long trip home and simply having to leave were the biggest.
We returned for the same reasons we went there in 2009. First, it was an Untour. We understood the format and the solid base Untours always provides in its destinations. We wanted the freedom to plan each day and enjoy the mobility afforded by the car provided. I had several years ago been on my first Untour to Montalcino in Tuscany and after that I was sold on the format.
It allows for some adventurism without risk and the ability to make your travels unique. As a serious amateur photographer I am always looking for another photographically rich venue. Other Untours to Umbria and Provence will always be remembered. 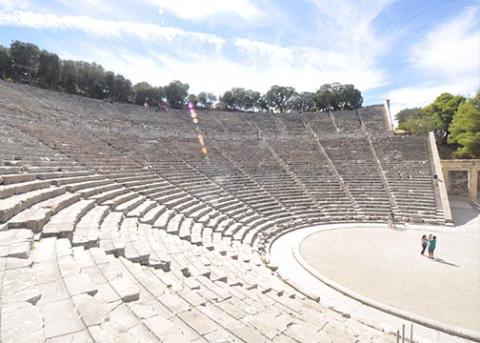 My favorite Untours memory may sound a little weird, but here it is. The first time I visited Epidaurus in 2009, after visiting the theater and wandering over to the Sanctuary of Asklepios and then proceeding into the ruins of this place of healing, I was rather suddenly overcome emotionally. I didn’t really know what was going on, but I felt tears building up, so I rested, sitting on a chunk of a Doric column.
It took me several minutes to regain a normal state. It was not an unpleasant feeling at all. I don’t know if being a physician had anything to do with it. It was amazing. It had never happened to me before or since, not even when I returned to Epidaurus last month. Lynne, who was walking some distance away had a similar, indescribable experience.
It is an Untour because it isn’t a guided tour, it isn’t being cooped up in a boat or a bus with scores of other people. It isn’t an itinerary, it isn’t planned by someone else, and, I suppose, it isn’t for everybody. The Untours staff has, over the years, routinely provided me with really great advice on destinations I might enjoy as a focal point and why.
The rest is up to the Untourist. Some folks are intrepid and drive hundreds of kilometers daily. Others may wish to enjoy more local destinations.
The orientations are very useful, especially on the topics of local customs, do’s and no no’s, where not to park, etc. One is provided a cell phone to call the local contact person if lost, in need of directions or translation. Christos, our go-to guy in Nafplio, actually drove to where we were (which was very lost) and led us to our destination on one occasion. The signs are in Greek after all. Bring a compass!