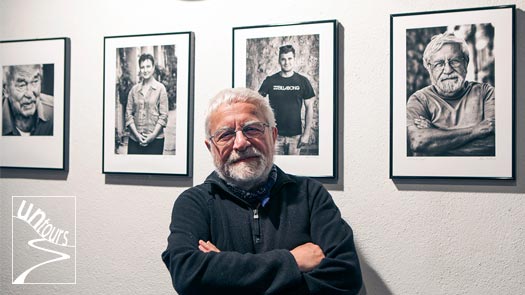 Subject and portrait. This and all photos below by Glen McClure.

If you have been reading the Untours Blog, you are already acquainted with Glen McClure, a loyal Untourist and brilliant photographer. You may have seen the images from his spring trip to Vence, France. But what you may not know is that this trip also included a long stretch in Tuscany, where he mounted a show of portraits shot on his previous trips to the region.

In cooperation with the Associazione Culturale di Murlo, Sarah Wadsworth and Camillo Zangrandi (also Untour landlords) organized Portrait of Tuscany, a collection of portraits they selected with Glen that captured his experience of the Tuscan people. “We wanted to show only images from the close by region,” says Glen.

His love affair with Italy has unfolded over the course of six trips. He explains his affection for Tuscany especially: “Rolling hills, beautiful fields, changing light. Perfect for a photographer.” 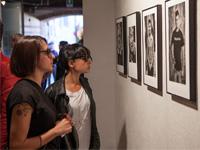 And his fascination with Italy is largely fueled by its people. “The Italians are beautiful,” he explains. “So open, engaging and friendly. The folks I have met in Italy seem really glad to be on this earth. When I’m making portraits in Italy, it is usually more of, ‘Where would you like for me to stand?’ than ‘Why?'”

Glen hires a local assistant to help and translate as he works. On one of his previous trips, Sarah accompanied him on his shoots. She says she was struck by “his way of capturing very meaningful expressions in every possible type of person. He has a knack for putting people at their ease while remaining very professional and communicating perfectly, even without the language!”

“Since I work on location, the biggest challenge is the streets are always so crowded,” he explains. “It is hard to find backgrounds without folks in the way. But you just have to think quick and move. I always try to keep in mind that these folks are giving up their time for me so I try to work quick.”

Glen McClure has mounted over 50 solo exhibits and participated in numerous group shows, most in his native Virginia. This one was hung in the Etruscan Museum of Murlo. “This exhibit was held in the oldest venue I have shown my work,” says Glen. 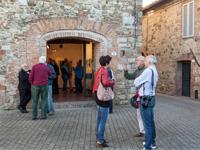 “It was a very vital and new experience for us in Murlo,” says Sarah, “as we are used to more obvious and colorful shows. Professional and expert photographers greatly appreciated his style and approach and the quality of the printing.”

The exhibit opening was well attended. “We met so many nice people,” says Glen. “Many locals came, and they were great. The other thing that was just awesome was so many of the Untourists who came. That made me so happy, since I’m sure they could have found any number of other things to do. I was just proud to have my work showing in such a place where the locals were mingling with all the Americans. It was awesome!”

Sarah was pleased with the results. “Local people were obviously interested,” she says, “as they knew some of the subjects. And it also attracted passing tourists.” 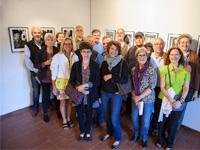 Glen enjoyed the whole process, start to finish. “Camillo and his wife Sarah are absolute gems, no question about that. So nice and so much fun to work with. I love them both.”

After the show’s opening, they arranged for an after-exhibition spread at the local restaurant. “Some of the Untourist stayed for that, plus some locals,” says Glen. “That was just great! What a night.”