All Ventures>>G Adventures>>Galápagos – Central and East Islands
Once you visit these isolated Galápagos Islands that teem with an incredible diversity of marine and animal life, you'll understand what makes them so special. Embark on this eight-day sailing tour onboard the Reina Silvia Voyager, our custom-built catamaran, which offers comfortable accommodations always close by. While exploring the central and eastern Galápagos Islands, you'll witness the giant tortoises of Santa Cruz, spot marine life (including three types of boobies) on the volcanic landscapes of Punta Pitt, and hike along a saltwater lagoon on Rábida.
Cruise Details | Itinerary | Excursions | Pre-Post-Trip Options 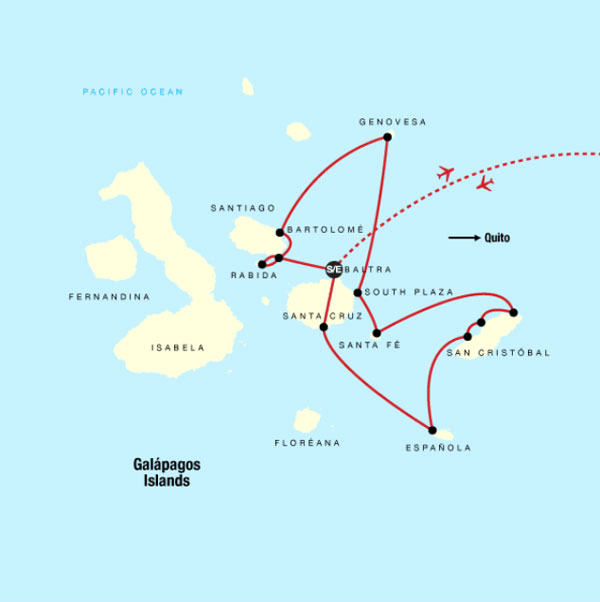 Arrive to Baltra airport no later than 11:00am. Transfer to Santa Cruz Island with the CEO to visit the highlands before arriving to Puerto Ayora and a visit to the Charles Darwin Research Station. Board the boat in the late afternoon. After arrival in Baltra, visit the highlands of Santa Cruz Island for a special opportunity to view the islands’ most famous reptile: the giant tortoises in their wild habitat. What a privilege to see an endangered species roving in this lush environment! The vegetation of the area includes the Scalesia Forest (an endemic giant daisy tree) and birds such as the vermilion flycatcher will delight everyone with its scarlet feathers against an emerald green forest. Look for Darwin’s finches, particularly the famous Woodpecker Finch. We will then visit the Fausto Llerena Breeding Center and Charles Darwin Research Station to learn first hand of the conservation and research efforts in the islands. There, you’ll see several subspecies of adult tortoises, lots of hatchlings, and learn of the repatriation programs that are saving several subspecies of tortoises and iguanas from extinction..

Enjoy the day on Española Island, one of the oldest in the archipelago. Visit the white sandy beach of Gardner Bay and the bird colonies of Punta Suárez. Take guided walks to observe wildlife and have free time for swimming or snorkelling. Spend part of the day visiting spectacular Gardner Bay. Walk across a lovely white sand beach amongst a busy sea lion colony and nesting sea turtles (seasonal). Later, take some time exploring the Punta Suárez visitor site, on the north-western corner of the island. Here, birds are everywhere—underfoot, on the trail, overhead, diving into the sea, taking off from cliffs, sitting quietly, and if the timing is right, engaging in ritual mating dances or hatching eggs. As the panga driver guides us in through the surf to the landing, sea lions are often seen “hanging 10” on the waves. A great tangle of marine iguanas, stretched out in the sun on the beach, are usually present when we arrive..

Travel to the dramatic Kicker Rock in the morning to witness the steep vertical stone walls rising from the ocean and enjoy some of the best snorkelling in the Galápagos. Continue to Isla Lobos on San Cristóbal to observe sea lions before landing at Punta Pitt in the afternoon for a walk to observe wildlife, birds and spectacular scenery. Start the day with an early navigation around the spectacular Kicker Rock. This striking rock formation is located a couple hours off the western shore of San Cristobal. Jutting out of the water, the rocks stand vertically at hundreds of feet above the ocean divided by a small channel. Head to Lobos Island, the most easterly point in the archipelago is one of only a few visiting sites in Galapagos where red-footed boobies can be observed. All three boobies (blue-footed, red-footed and Nazca) are known to nest here, and at Islote Pitt which is a small islet near the anchorage. Blue-footed boobies can often be seen plunge-diving for fish while frigate birds soar overhead. The trail at Punta Pitt winds up through eroded volcanic tuff formations to a plateau for a spectacular view of the island, and Islote Pitt. Along the trail are endemic plants and wildlife unique to San Cristobal, such as the San Cristobal mockingbird and the San Cristobal lava lizard.

Visit Santa Fé island for a chance to mingle with the iguanas. Continue to South Plaza for some great bird watching opportunities and views from the oceanside cliffs. Today, spend time visiting fascinating Santa Fé, home to a small population of very large land iguanas, and the largest of the Opuntia cacti. The lagoon is ideal for swimming and snorkeling; sea lions and colorful fish are in abundance here, as well as the occasional sea turtle. Later, visit South Plaza, a small, but very rewarding island to visit. Here you see an array of endemic land iguanas munching on Opuntia blossoms and leaves. On the upper edge, at the windward side, Swallow Tailed Gulls nest. Watch these beautiful birds maneuver in the tricky air currents as they set up to land on the cliff face. From the bluff you can see schools of Yellowtail Mullet, occasionally a shark, and lots of birds flying back and forth.

Visit Darwin Bay and marvel at the sheer number of birds along the many trails. Head to El Barranco in the afternoon to see the many types of boobies, including red-footed boobies.

Visit Sullivan Bay on Santiago Island to witness the giant lava formations contrasting the white-coral-sand beach. Continue to Bartolomé for a guided walk to see the island's dramatic volcanic features and the iconic Pinnacle Rock. The morning visit heads to Sullivan Bay on Santiago Island, located on the southeast part of the island. This place is interesting for its geology because the area has elevations in form of small volcanoes, formed by the lava flows. Later, head to Bartolomé Island, home of the famous Pinnacle Rock. This is an exceptional place to observe volcanic island geology and to snorkel. Among the many colorful species you will see Bi-color Parrotfish, Streamer Hogfish, and Flag Cabrilla. Sometimes you get a special treat—a penguin “snorkeling” right around you in hunt of fishy treats. The long climb up the wooden steps to the pinnacle of this cinder cone takes you through cinders and rough volcanic formations, a veritable moonscape. The lower slopes are graced with a light sprinkling of the delicate, silvery Taquilia, a ground hugging plant adapted to this harsh spot. On top you will enjoy the spectacular view of Bartolomé, Santiago, and several other nearby islands.

Spend the morning exploring the red sand beaches and salt water lagoons of this tiny island. Look for wading flamingos and nesting pelicans before heading out to do some snorkelling. In the afternoon, discover the lava flows and lava tunnels on the small island of Chinese Hat. After, enjoy a refreshing dip in turquoise waters. Search for fish and sea turtles in the protected bay. Rabida is a “small red island,” the colour of the volcanic cinders.The red beach is usually well populated with sea lions and pups. At times the low salt bushes are loaded with nesting California Brown Pelicans. Just behind the beach, in a brackish lagoon, see Bahamas White-cheeked Pintail Ducks, migratory shore and wading birds, and Greater Flamingos. Flamingos need the presence of a dozen or two other flamingos to stimulate their synchronous mating dance. If our timing is right, we will be able to observe this highly entertaining ritual as well as two species of boobies nest along the cliffs. Later, travel to Sombrero Chino, a tiny island just off the southeast tip of Santiago. Its name (Chinese Hat) describes the island’s shape. Though centrally located, it is one of the least visited sites in the area. Patches of pahoehoe lava, cracked lava and lava tubes can be found on the island. If you’re up for a walk, a path leads to some spectacular views of the waves crashing below. White-tipped sharks frequent the area, as do the playful Galapagos Penguins and sea lions.

After breakfast, disembark and transfer from the boat to Baltra airport for onward travel. Tour concludes upon arrival to the airport.