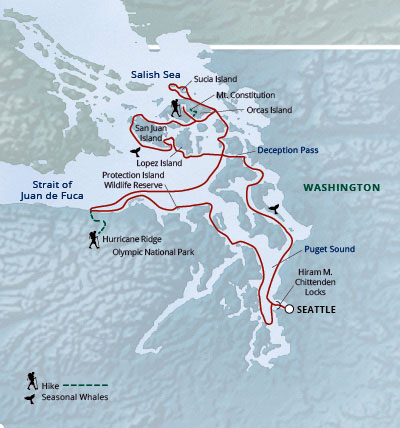 In a region renowned as a boaters’ paradise, your discovery begins from Fishermen’s Terminal. Set sail via the ship canal to Lakes Union and Washington—their glacially formed basins dug more than 12,000 years ago. After dinner, a sunset cruise through the historic Hiram M. Chittenden Locks and into Elliott Bay sets you right for the night. Seattle was founded along these shores and you don’t want to miss the skyline! (D)

Mudflats, watersheds, and a microclimate feed the riches of the South Sound. Explore the intertidal zone by kicking in the mud with your guides looking for anemone and hermit crabs. Kayaking, hiking, and skiff rides are on tap, too—in one of the region's many state parks. At about 100 miles long, Puget Sound offers ample opportunity for observing the serpentine shore as you cruise through Tacoma Narrows and past Point Defiance, Vashon Island, and Bremerton. Cap off your first full day of play watching for Dall’s porpoise, with a front-row view from the bow. (BLD)

Wake up surrounded by the wilds of the Salish Sea, a humbling 360 degrees of wilderness. It’s the captain’s choice where you’ll land today, but rest assured, you’ll be away from the crowds. There are unending options for investigating this sea-salty playground. If you’re kayaking, keep your eyes peeled above and below the surface. Rocky outcroppings play host to harbor seals—and it’s also orca territory. Ashore, it’s one boot in front of the other, hike through the forest or “take the high road” to ridges overlooking the archipelago. Join your expedition team on deck to search for whales, seals, sea lions, and bird rookeries as you cruise through the myriad San Juans—no two islands are the same. (BLD)

A guided kayak reveals local inhabitants—sea stars, anemones, jelly fish, perhaps even inquisitive harbor seals. Walk along a curiosity-rich intertidal zone or stretch your legs on a mossy hike. And tides and current permitting, perhaps even sail through the swirling waters of Deception Pass. Later in the day, keep watch for marine mammals as you venture into the open waters where the Strait of Juan de Fuca meets Puget Sound. Drop anchor for the evening in a tucked-away cove. (BLD)

The treats keep coming! With no paved roads or even ferry access, enjoy your day on picturesque Sucia Island—total year-round population of four—a Washington State Marine Park filled with hidden coves and bays. You feel a million miles away from it all, exploring the intertidal zone with your guides, hiking across the island, and kayaking in a protected bay. Weather permitting; there’s even a barbeque ashore.

Make it an ideal morn by kicking it off with an early soak in the on-deck hot tub, a paddle along the shores of the Olympic Peninsula, or both! Your Captain sets the course today for explorations in the rain shadow of the Salish Sea. You may find yourself hiking deep into the mossy, towering old growth of the Olympic Peninsula or beachcombing for anemone and hermit crabs along the shores of Puget Sound. Or perhaps, a chance to kayak and paddle board, investigate bird rookeries, or search for whales in the Sea’s rich emerald waters.

Olympic National Park Hike (or snowshoe if the snow is still there!) in Olympic National Park — a UNESCO World Heritage Site — surrounded by rainforest, old-growth forest, and top of the world 360-degree views. This evening, wrap it up with a Farewell Dinner and slide show highlighting your week’s adventures. (BLD)

This morning, cruise through the Hiram M. Chittenden Locks and tie up back in Seattle’s Fishermen’s Terminal. After breakfast, the captain and crew bid you a fond farewell. Safe travels to all! (B)
Cruise Details | Itinerary | Excursions | Pre-Post-Trip Options